India at a glance 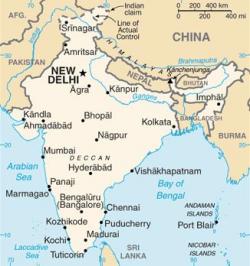 Bananas are both grown in homestead gardens and cultivated commercially on large areas. Commercial production is largely dependant on irrigation whereas subsistence cultivation is practiced under rain-fed conditions.

More than 20 types of bananas are grown, such as Poovan, which is mostly grown in the south, Rasthali, Nendran, Karpuravalli, Kunnan, Ney Poovan, Thella Chakkara Keli and Monthan. Pisang Awak has been adopted in the marginal lands of Bihar, West Bengal, and in the northeastern states5 .

Main types of bananas by importance of production. 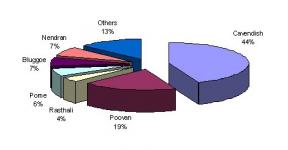 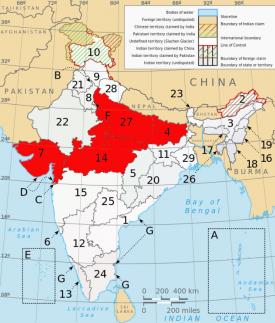 Tropical race 4, which attacks Cavendish cultivars and a wide range of banana types, has been present in the Katihar and Purnea districts of Bihar since at least 2015 and has since spread  to the states of Uttar Pradesh, Madhya Pradesh and Gujarat 6 . Its presence was officially confirmed in 2018, based on isolates collected in 2017 in Uttar Pradesh7 .

Banana can be processed into different value-added products. Banana puree is used in dairy products, bakery, beverage and baby food. Banana flour is increasingly used in foods like chapathies and bread.

Plantains are usually processed into chips and the peel can be used in pickles. The male bud can also be pickled. The process has been transferred to several entrepreneurs for commercialization.