A global list of cultivar names hopes to bring taxonomic relief to scientists working on bananas. 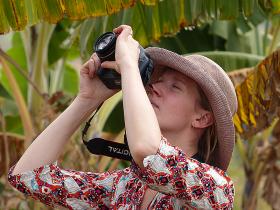 Rhiannon Crichton familiarizing herself with banana cultivars in Burundi.

When Rhiannon Crichton, a plant scientist at Bioversity International, started analysing data from evaluation trials of banana improved hybrids and cultivars, she experienced a feeling familiar to most people researching the crop: taxonomic confusion.

“Improved hybrids are readily identifiable because they usually have a distinct name given by the breeders”, says Crichton. “The problem with cultivars is that most of the time, all you have to go by is a vernacular name, which can be very specific to a local area, even if the cultivar is widely distributed. For example, I would read about ‘Pisang Awak’ in Malaysia, ‘Kayinja’ in Uganda and ‘Ducasse’ in Australia – it took me a while to work out that these names are theoretically all referring to the same cultivar!"

The problem is not unique to cultivated crops. When the Swedish botanist Carl von Linné devised a binomial nomenclature system for naming species, his idea was that scientists would know immediately what they were talking about because each species would have one scientific name. But as the number of classified species increased, taxonomists struggled to figure out which name had been used before, and which organisms had been described, and inevitably made mistakes. So taxonomists started compiling species names into checklists, indicating which ones were accepted by taxonomists and which ones had been shown to be synonyms. The checklist for the Musa genus, for example, is managed by the Kew Royal Botanic Gardens.

Scientists trying to do a similar exercise for banana cultivars have more obstacles to overcome, the most obvious one being the fact that the farmers giving names to cultivars don’t share a common language. In his 1966 book on bananas, Norman Simmonds estimated that at the time half the cultivars of the world were well known, but that it would be “many years before an authoritative list of names and identities can be compiled” and that “until that is done there is no point in arguing about priorities and choice of name”.

The banana community is still a long way from having an authoritative list, but as Crichton realized when she started reading the literature, taxonomists and linguists have been busy collecting and recording cultivar names. “Being based in Montpellier, I had access to the office’s well stocked library on bananas. I also discovered that several scientists working on bananas had been exchanging annotated lists of local names and that these were sitting in colleagues’ computers. To keep track of all the local names and synonyms I started compiling them in a spreadsheet. It soon became apparent that the list would also be useful to others and a natural complement to the cultivar pages I had been helping to develop on the collaborative ProMusa platform.”

The timing could not be better. A few months before, Bioversity Scientist and ProMusa coordinator Inge Van den Bergh had been in contact with the ISHS Commission on Nomenclature, which had once approached Bioversity about acting as the International Cultivar Registration Authority (ICRA) for ornamental Musa species and cultivars. “As Alan Leslie of the ISHS Commission described it", says Van den Bergh, " the ICRA system was set up to ensure that new cultivar names have not been used before and that they conform to the International Code of Nomenclature for Cultivated Plants. This is why an ICRA needs to build a checklist, to draw together all previous uses of names, in addition to setting up a register, to record the new accepted names. When Rhiannon started compiling a checklist, I agreed with her that it would be a useful resource for the Musa community, irrespective of whether Bioversity decides to become an ICRA or not.”

When the checklist was put online on Musapedia’s banana cultivar checklist page it clocked up 5,432 entries that can be browsed or searched using filters. At its core are the Local name, Location and Reference fields. “That part of the checklist should not change since it is linked to the source”, explains Crichton. “On the other hand, the classification fields – Cultivar, Clone set, Subgroup and Group – are open to revision. For this first version of the checklist, I put the information available in the reference, which is why there are many blank cells. We hope that people with relevant information will weigh in and help improve the checklist.” Indeed, each entry is linked to a comment feature that people can use to provide feedback.

While sorting out which names are synonyms is obviously desirable, it also implies making a decision on which name should be selected as the accepted name and promoted to the community. Julie Sardos, a Genetic Resources Associate Scientist at Bioversity, also notes that “the establishment of a cultivar checklist presents a good opportunity for the community to review the nomenclature system used to classify edible bananas, namely the concepts of clone set, subgroup and genome group. The idea is to come to an agreement on the definition and boundaries of each of these groupings to ensure that they represent meaningful evolutionary relationships". Van den Bergh agrees and adds that the process to achieve these tasks will need to involve not only banana specialists but also experts on checklists and horticultural taxonomy.

It will take time and effort to arrive at a comprehensive and internally coherent checklist of banana cultivars names, especially since names will keep on being added, but as one of the reviewers invited to comment on an earlier version of the checklist observed, “a journey of a thousand miles starts with a first step”.