The story of Katana’s banana farmers in DR Congo illustrates how destructive Xanthomonas wilt can be, but also how manageable it is. 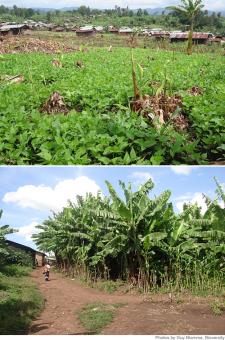 After one year of applying SDSR, nearly all the plants look healthy.

Three years ago, Xanthomonas wilt, commonly known as BXW, reached the village of Katana overlooking Lake Kivu in the Democratic Republic of the Congo. Within two years the bacterial disease had spread to nearly 80% of the defenseless banana plants (to date, no resistant cultivar has been identified).

At that point many of the farmers had decided to clear their fields to make way for other crops. They had cut all the standing banana plants and were about to dig up the underground rhizomes when Jules Ntamwira from Bioversity International’s South Kivu office heard about their predicament. He alerted his colleague Guy Blomme, who was looking for infested fields in which to test the efficiency of the single diseased stem removal technique (SDSR) as an alternative to the recommended uprooting of the entire mat (the rhizome and all its attached stems: the parent plant and its offshoots, wich are called suckers).

The Bioversity scientists couldn’t have asked for a more infested site, given how the still healthy mats probably got infected when the same cutting tools were used to remove both the sick and healthy stems. All the scientists had to do was convince the farmers to give bananas a second chance.

Many of the mats were uprooted and replaced with other crops, but 600 mats spread over 10 plots were spared the axe and became the first of 8 pilot sites set up in North and South Kivu1 . The Katana site is atypical in that all the stems had been cleared by the start of the trial. In the other sites, the trials were initiated by cutting off only the diseased ones. Notwithstanding this difference, which didn’t affect the results, the application of the SDSR technique was the same from then on. The plots were regularly inspected for disease symptoms. Each sick stem was cut at soil level and its apical meristem destroyed to stop it from growing back.

The felled stems were left to rot on the ground, instead of being chopped up, to minimize exposure to the bacteria-laden exudates that provide the means of transmission to new plants by insects and contaminated tools. For the first phase of the trial, farmers were asked to hold off routine management practices that pose an infection risk (such as cutting leaves and thinning out suckers) to measure the effect of the SDSR technique on the decline of infections.

One year later, the Katana site is thick with healthy-looking plants and the incidence of the disease has been reduced to negligible levels, less than 0.5%. “The results are spectacular”, says Blomme who is supervising the 8 pilot sites. “I would not have believed it myself two years ago.”

The precursor to the SDSR technique

Removing the diseased stem has been a contentious issue ever since Xanthomonas wilt started spreading through Uganda and neighbouring countries in the early 2000s. At the time, the only recommended course of action in the presence of a diseased plant was the backbreaking uprooting of the entire mat. However, surveys showed that farmers were reluctant to remove an entire mat when only one of the plants was showing disease symptoms. To the extent they were doing something to control the disease, they were more likely to cut off the diseased stem than dig up the mat.

Since the prevailing assumption was that once in the rhizome the bacteria would go on to infect the attached suckers, scientists were sceptical about the efficiency of removing only the diseased stem unless it stopped the bacteria from entering the rhizome. To test the possibility, NARO and Bioversity scientists selected plants of Kayinja (a hardy cultivar popular among resource-poor farmers) whose inflorescence had been infected by insects. They sampled the aerial true stem and rhizome for the presence of bacteria and correlated the results with the progress of the symptoms. The results suggested only one window of opportunity: removing the diseased stem at the first appearance of symptoms (shrivelled bracts). When the procedure was repeated on a cultivar from the widely cultivated East African Highland Banana group, a third of the rhizomes had bacteria at that early stage. It didn’t bode well for the improvised disease-management practice, but there was still one unknown: what happens to the bacteria after they’ve entered the rhizome.

To find out, scientists retreated to Kifu forest, in Central Uganda, where it would be easier to protect the bananas from unwanted contamination than in farmers’ fields. By 2008, both IITA and Bioversity had set up experiments in which scientists inoculated bacteria in different parts of Mbwazirume (an EAHB cultivar) and Kayinja plants. In one of the treatments, the mother plants predictably rotted away, but contrary to expectations nearly all the first, second and third generations of suckers went on to produce healthy bunches (each new bunch was covered to prevent contamination by insects visiting the male bud).

The details need to be worked out, but at least two factors are involved. One is incomplete systemicity of the bacteria. The rhizome’s cortex layer seems to act as a more or less solid barrier to the movement of bacteria (when they were injected directly into the rhizome’s cortex, none of the Mbwazirume plants developed disease symptoms and only about 20% of the Kayinja plants did). The other phenomenon is latent infections, which is when suckers are infected but do not develop symptoms (15 to 43% of the asymptomatic plants that were sampled had trace amounts of bacteria). 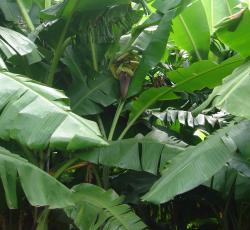 Farmers in Katana will soon have to remove the male bud of the flowering plants.

“The controlled experiments in Kifu forest showed that it’s not necessary to remove the mat to control Xanthomonas wilt”, says Walter Ocimati, who oversaw the Bioversity experiments in Kifu forest. “As long as fresh infections are prevented, infected mats will recover under the combined effects of incomplete systemicity and latent infections.” In farmers’ fields, latent infections mean that from time to time a plant will show symptoms, but the impact on production should be minimal as few of the new shoots will develop the disease, says Blomme. He adds that even though cutting only the diseased stems does not eliminate all the bacteria in the mat, it greatly reduces the risk of spreading the disease. But just as uprooting the mat doesn’t guarantee that a field won’t get infected again, the SDSR technique does not protect the remaining plants against the pathogenic bacteria. Farmers also need to prevent infection by removing the male bud and being careful with their tools to avoid infecting healthy plants, as the authors of a paper on a series of NARO-led trials in farmers’ fields also concluded.

With the harvest of the first bunches coming up, enthusiasm is high among Katana farmers, and the non-project farmers who have copied their neighbours. The true test will be whether it can be sustained over time, as signs of the disease fade away and preventing infections feels less pressing.

1 The field trials are conducted in partnership with DRC's national institute on agronomic research, INERA, in South Kivu and the Catholic University of Graben in North Kivu. The trials are funded by the FAO, as part of a regional project on BXW, and by the Belgian Directorate General for Development Cooperation.