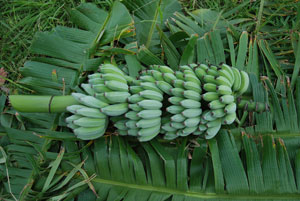 'Kayinja' is the name given in the Ganda/Luganda language of Uganda to 'Pisang Awak' (ABB genome group). The name is usually applied to the plants that produce fruits with little to no wax. The waxy fruit variant is called Musa or Kimusa.

In Uganda, the cooking banana is mostly used to make beer and juice. The juice is made by mashing ripe fruit in a large tub or bowl with banana leaf or grass leaves. It is worked with the hands until the solids start to separate from the pulp. After a few minutes, the juice is poured back through the leaf mash to strain out the pulp. In its raw state, it is very sweet but adding water produces a refreshing beverage.

In a trial conducted in Burundi, both the 'Kayinja' and 'Pisang Awak' accessions had no signs of bunchy top 28 months after being exposed to the virus1 . The virus was found in 'Pisang Awak', indicating that the cultivar is tolerant to the virus, and can act as a reservoir, but is not resistant. 'Kayinja' had not been tested for the presence of the virus at the time of publication.

Like all cultivars tested so far, 'Kayinja' is susceptible to Xanthomonas wilt, but it is also particularly susceptible to insect transmission of the disease.