Loading...
In pictures » The beer bananas of East Africa

Africans were using locally available crops to brew beer long before Europeans introduced their own techniques, but East Africans stand out in that their traditional beer is made with bananas. In Uganda, one of the names under which the original beer bananas are known is mbidde. It is also the name given to the cluster they form within a large group of otherwise cooking bananas, the East African highland bananas (EAHB). The low genetic diversity underpinning EAHB cultivars suggests that they are derived ? through mutations ? from a single ancestor that may have been introduced as long ago as 500 BC1 . The mbidde cultivars are mutants of the cooking ones, but since farmers propagated them despite their lack of culinary qualities, it would mean that mbidde bananas are an example of a crop domesticated for beer, not food.

The practice of making banana beer the traditional way is still alive in many rural areas of Uganda, Tanzania, Burundi, Rwanda, and the Democratic Republic of Congo (DRC), where it is an important part of the rural economy along with non-traditional methods of processing bananas into wine and gin. As Bioversity International scientist Anne Rietveld noted during her presentation at the 2016 ISHS-ProMusa symposium, these banana-based beverages are one of the few income-generating options available in rural areas.

1 The genetic signature of EAHB cultivars suggests that their ancestor was from an area encompassing New Guinea and surrounding islands. No close genetic link has been established with cultivars in that area, beyond morphological similarities that suggest some level of kinship. 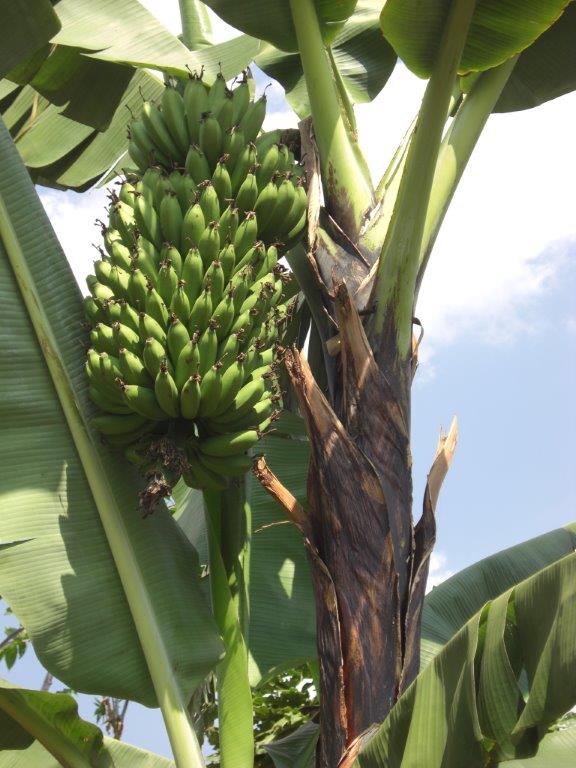 Mbidde cultivars, such as Entundu on the photo, are unpalatable even when cooked. They produce bitter astringent fruits that are high in tannins and secrete a brown sticky latex, hence their only use for making beer. Entundu is grown in Uganda, Burundi, Rwanda, Tanzania and DRC, but like the other EAHB beer cultivars, its popularity is on the wane. Nowadays most brewers use cultivars that were introduced in more recent times and that, unlike mbidde cultivars, are also eaten raw or cooked. They are only called beer bananas because they are often used to make beer. (Photo by Deborah Karamura) 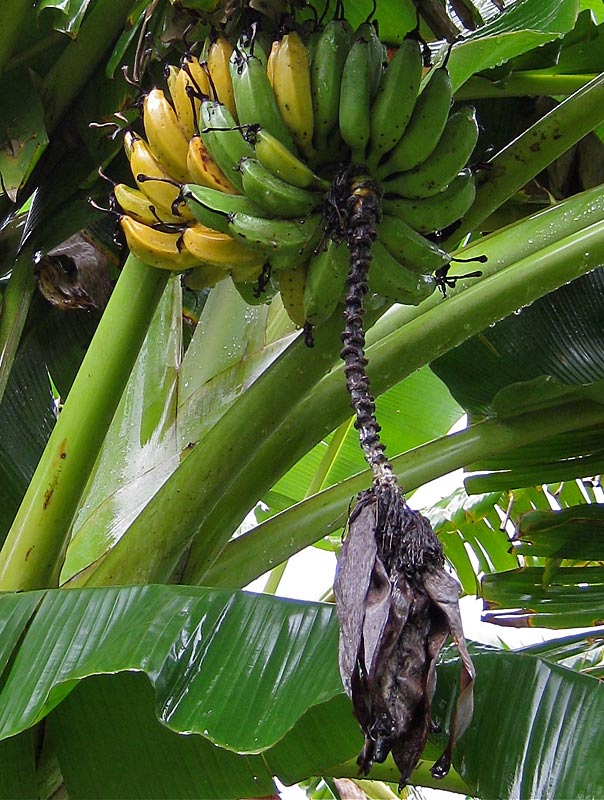 In Uganda, the preferred cultivar for brewing beer is ‘Kayinja’, a Pisang Awak type appreciated for its hardiness and the type of juice it produces. However, like all other cultivars it is susceptible to a bacterial disease commonly known as BXW for banana Xanthomonas wilt; with the added twist that insects, which are a vector of the bacteria, are especially attracted to the sweet nectar produced by its flowers. Although cultural methods exist to prevent infections, growers of beer bananas were not used to take much care of their plants when the epidemic started. As a result, the production of beer bananas has been severely impacted. Other popular cultivars in the region are ‘Kisubi’ (a Ney Poovan type), ‘Yangambi km 5’ and various FHIA improved hybrids. (Photo by Pascale Lepoint) 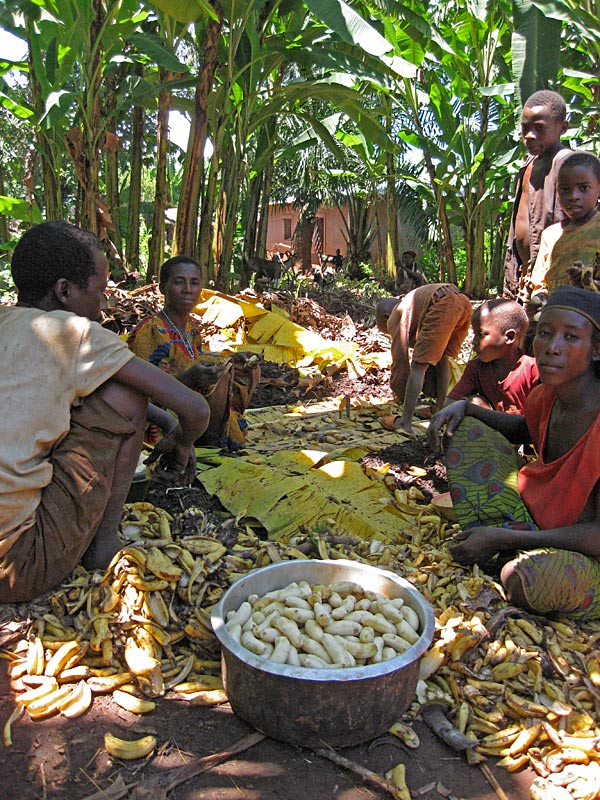 Beer bananas are most commonly grown in Burundi and DRC’s North and South Kivu provinces (where they occupy nearly 85% of the land under banana cultivation), and rarest in Uganda and Tanzania’s Kagera Region (where the percentage is less than 10%). In Rwanda, the share of beer bananas has decreased to 47%, from 60% 20 years ago, following efforts by the government to discourage farmers from growing them. Most of the brewers are farmers using their own bananas, to which they may add bunches bought from other farmers. (Photo by Pascale Lepoint) 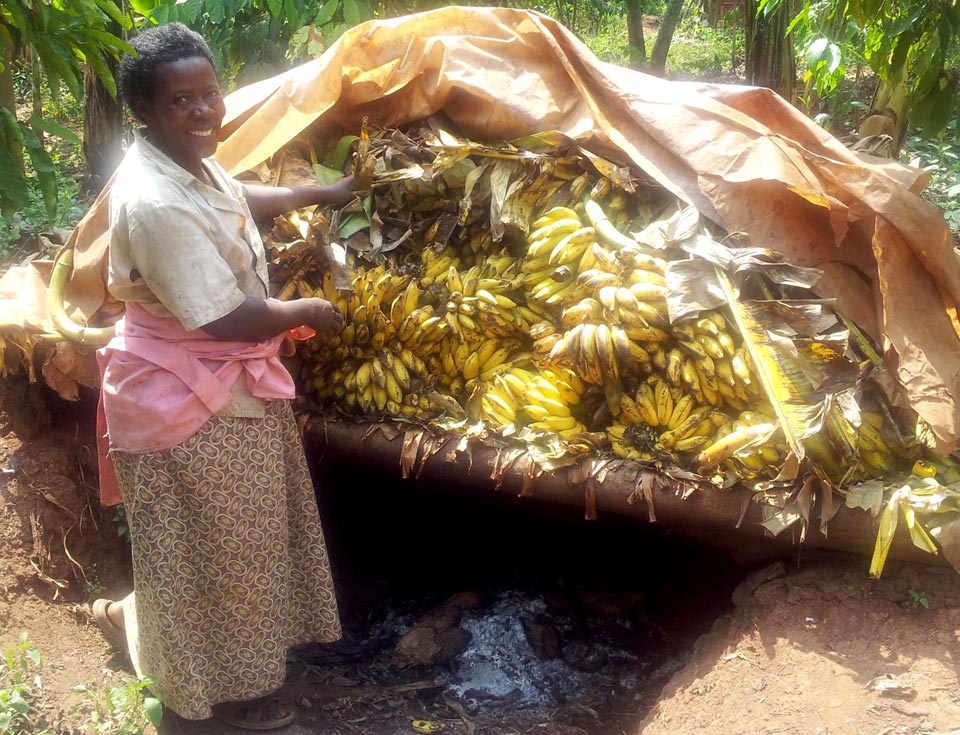 The bananas are harvested green and artificially ripened. One method is by putting them in a shallow pit in the ground and covering them with banana leaves and soil to generate enough heat to accelerate ripening. Another is to arrange the fruits on a wooden rack placed over a cooking hearth (see photo). The fruits are covered to avoid desiccation during smoking, a process that typically takes 6 days and from which they emerge yellow. (Photo by Anne Rietveld) 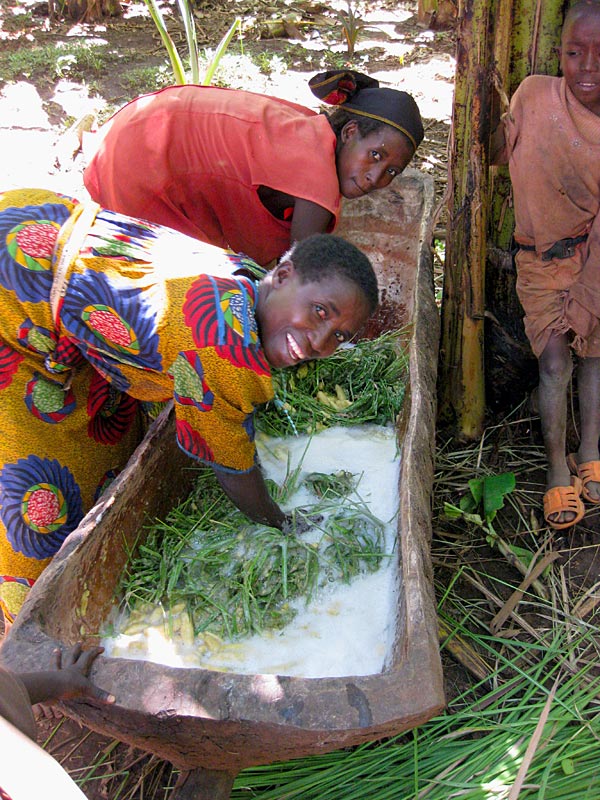 The bananas are peeled and put in a brewing vessel, such as the traditional canoe-shaped one. Spear-grass, such as Imperata cylindrical, is used to knead the bananas until a clear juice is extracted. (Photo by Pascale Lepoint) 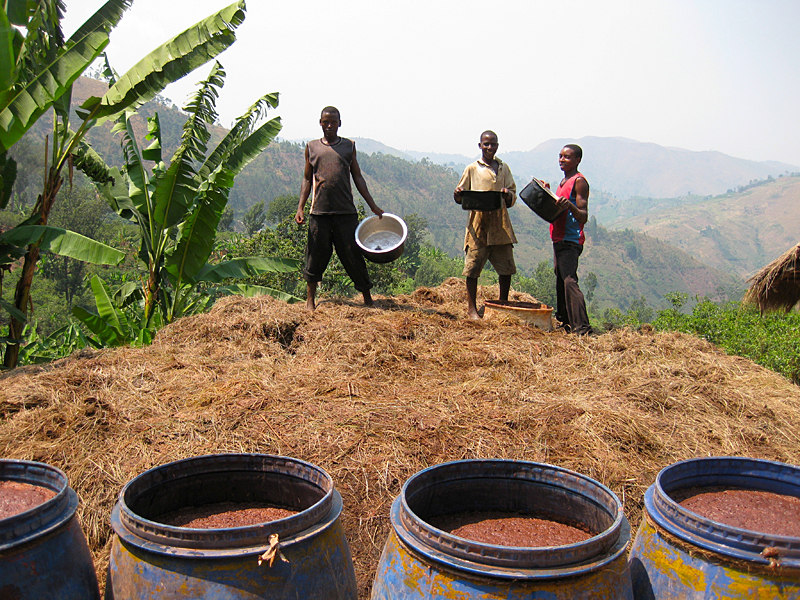 The filtered juice is diluted with water and roasted red sorghum is added. Fermentation usually takes place in the brewing vessel, which is covered with banana leaves. In Burundi, fermentation tends to be done in plastic barrels. (Photo by Pascale Lepoint) 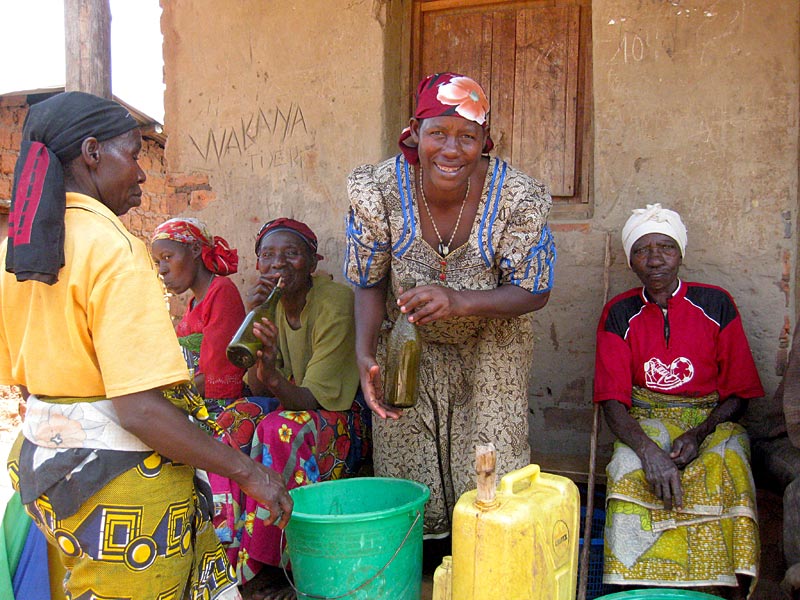 After fermentation, the beer is poured in jerrycans and ready for consumption. Many women participate in the value chain, as grower (in Uganda, DRC and Rwanda women in female-headed households produce more bunches than men), brewer and/or retailer. In Central Uganda, for example, two-thirds of the owners of rural bars interviewed by Anne Rietveld and her colleagues were women. The bar was often run from the homestead or near it, making it easier for women to combine their income-generating activity with raising young children. (Photo by Pascale Lepoint) 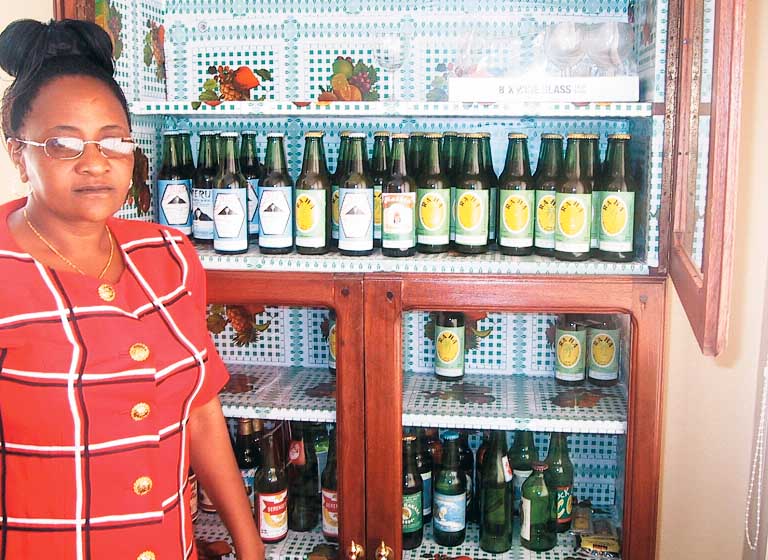 Industrial banana beer is also produced, but in urban areas it captures a smaller market share than the other types of bottled beers.