Papua New Guinea and its offshore islands is host to a seemingly inexhaustible diversity of bananas. At the end of the 1980s, a series of collection missions lifted the veil on its then little known diversity. More than 80% of the 264 samples of wild and cultivated bananas collected in mainland Papua New Guinea and the Bismarck Archipelago were new to taxonomy experts. At the time, what is nowadays the Autonomous Region of Bougainville was not visited because the area was going through a period of civil unrest. It has now been done. Last October, a team of five scientists spent two weeks collecting and documenting the banana diversity on the islands of Buka, Sohano and Bougainville1 2 .

Concentrating on material not in collections, they collected 44 samples of edible bananas related to the wild species Musa acuminata3 . Of these, 30 are diploid bananas (that is they have two sets of chromosomes, like their wild ancestor).  Even though edible diploids are a necessary step in the domestication of bananas, and are sought after by breeders, they are typically less common than the triploid bananas (three sets of chromosomes) they gave rise to. Finding so many diploid cultivars in one place is unusual and further consolidates the reputation of the New Guinea region as an exceptional hotspot of banana diversity. Another 17 samples were collected: mostly ornamental and Fe’i bananas, and the two native banana species (Musa bukensis and Musa maclayi). The latter belong to the former Australimusa section, which has been renamed Callimusa following a merger of the sections.

The collecting mission was organized by Bioversity International  and Papua New Guinea’s National Agriculture Research Institute (NARI), and funded by the CGIAR Genebank Platform with a contribution from the Belgium government. The collecting team was composed of Janet Paofa (curator of the NARI banana collection in Laloki), Gou Rauka (phytopathologist at NARI in Lae), Gabriel Sachter-Smith (member of MusaNet’s Taxonomic Advisory Group), Steven Janssens (research fellow at the Botanic Garden Meise in Belgium) and Julie Sardos (associate scientist at Bioversity International in France and co-chair of MusaNet's Diversity Thematic Group). The team was accompanied by a local guide, Zohn Bosco Miriona of Bougainville Experience Tours. The collected suckers4 were transferred to the NARI banana collection in Laloki and to a plot of land belonging to the president of the Arawa Women in Agriculture on Bougainville Island. After the plants have been characterized morphologically and molecularly, the unique material will be duplicated to the International Transit Centre in Belgium.
1 Report of the banana collecting mission in the Autonomous Region of Bougainville, Papua New Guinea
2 Catalog of the banana diversity seen on the islands of Bougainville and Buka, Papua New Guinea
3 Some of the edible bananas are also related to Musa balbisiana.
4 A maximum of six suckers were collected per sample. 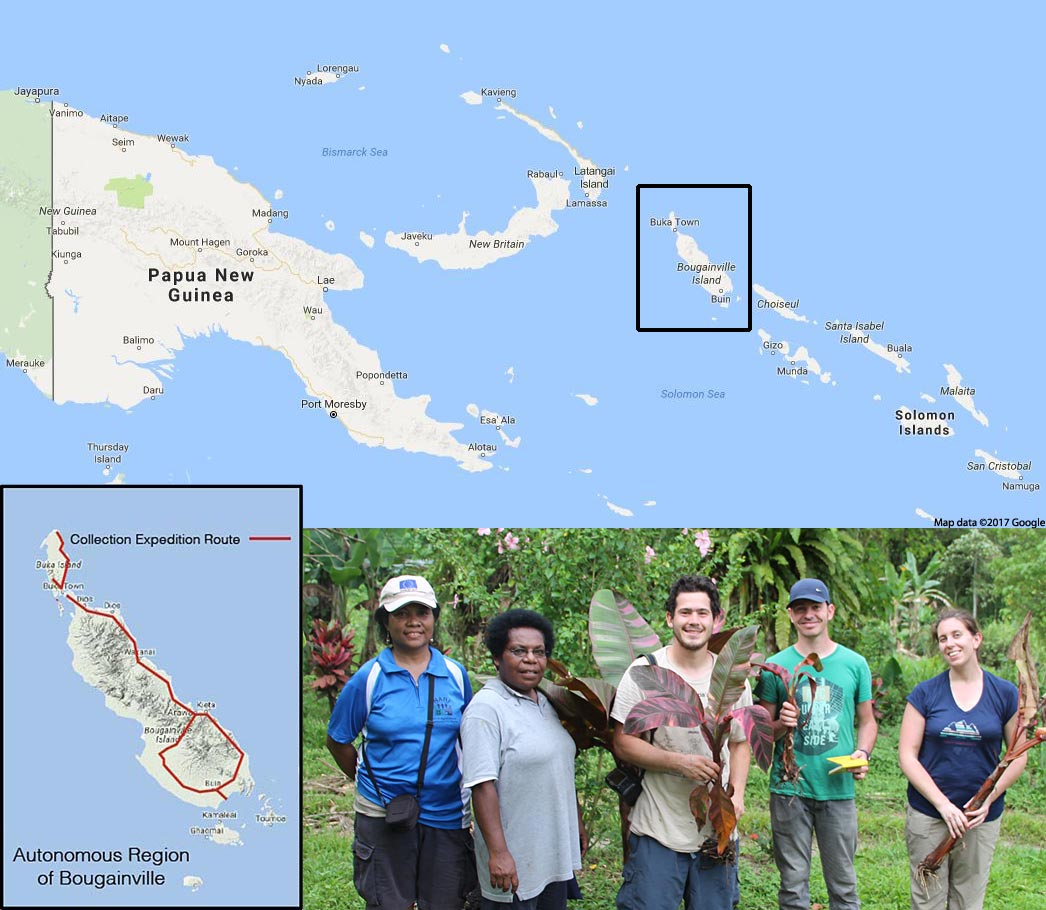 Although the Autonomous Region of Bougainville is politically part of Papua New Guinea, it is geographically and culturally part of the Solomon Islands archipelago. The collecting team (from left to right, Gou Rauka, Janet Paofa, Gabriel Sachter-Smith, Steven Janssens and Julie Sardos) visited the region between the 19th and 31st of October 2016. (Photo by Zohn Bosco Miriona) 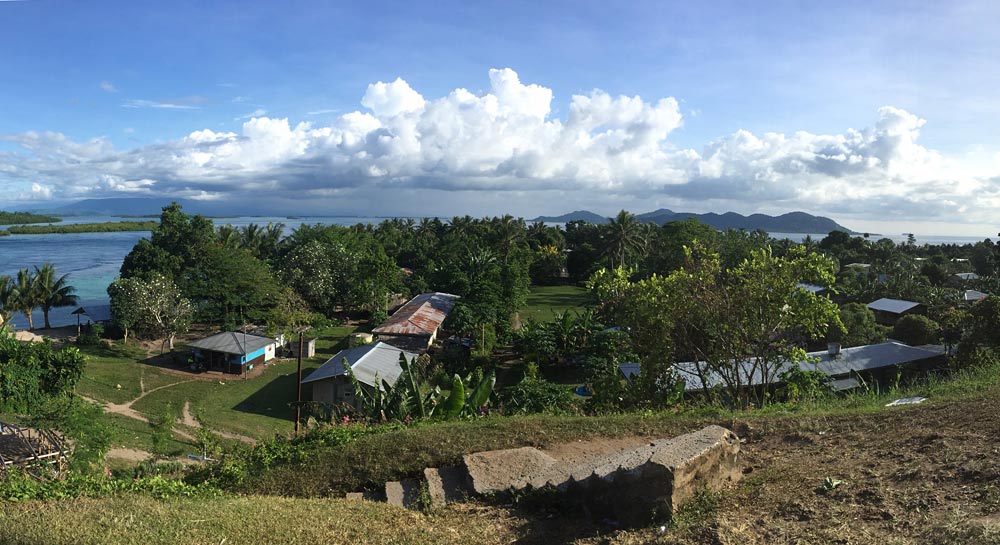 Sohano Island lies at the edge of the channel that separates the islands of Bougainville and Buka. In the distance, one can see Bougainville under the clouds and Taiof Island on the right. With the possible exception of the Fe’i types, the islands’ cultivated bananas were most likely introduced since Musa acuminata has never been reported by the botanists who visited the area. (Photo by Gabriel Sachter-Smith) 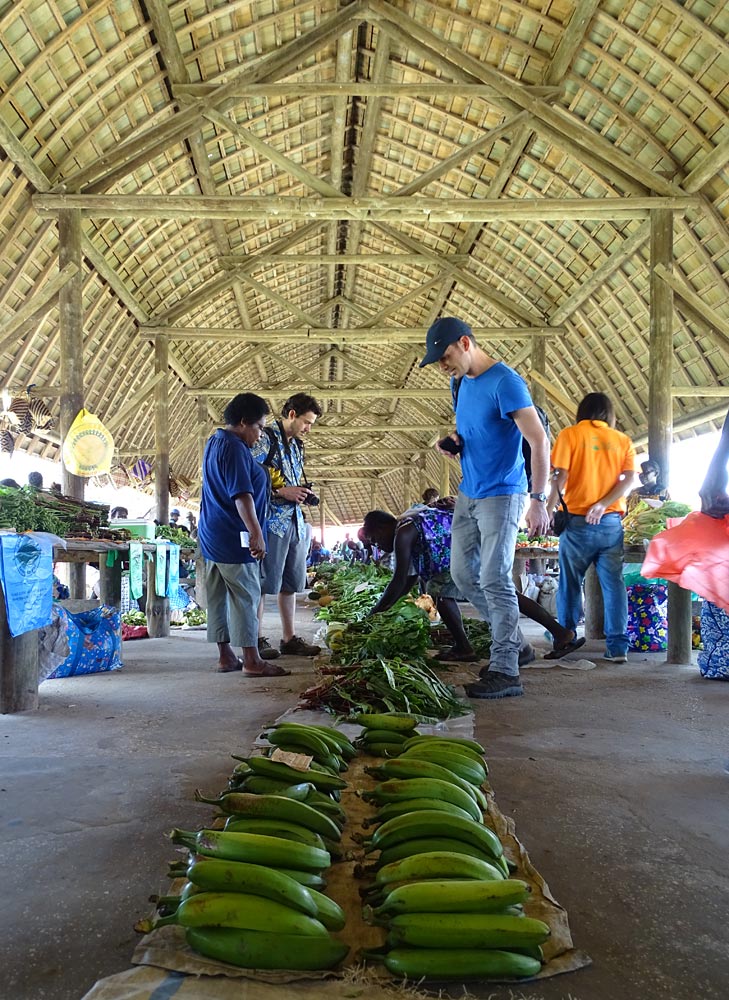 The team did some reconnaissance in markets, on the lookout for bananas to ask about when visiting farmers. This is where they first spotted a slender and curvy banana with an almost white peel (see below). The vendor did not know its name, but after being asked a few times made one up. Pointing to Julie Sardos’ white skin, she named it ‘Misis’, the local word for European woman. When the team saw the banana again in a field adjacent to a school, they asked one of the teachers who had the same reaction. After looking at Gabriel Sachter-Smith, he named the banana ‘Wait masta’ (white master). The team eventually found someone who was growing the banana plant and said that in her village it was called 'Talasea'. (Photo by Julie Sardos) 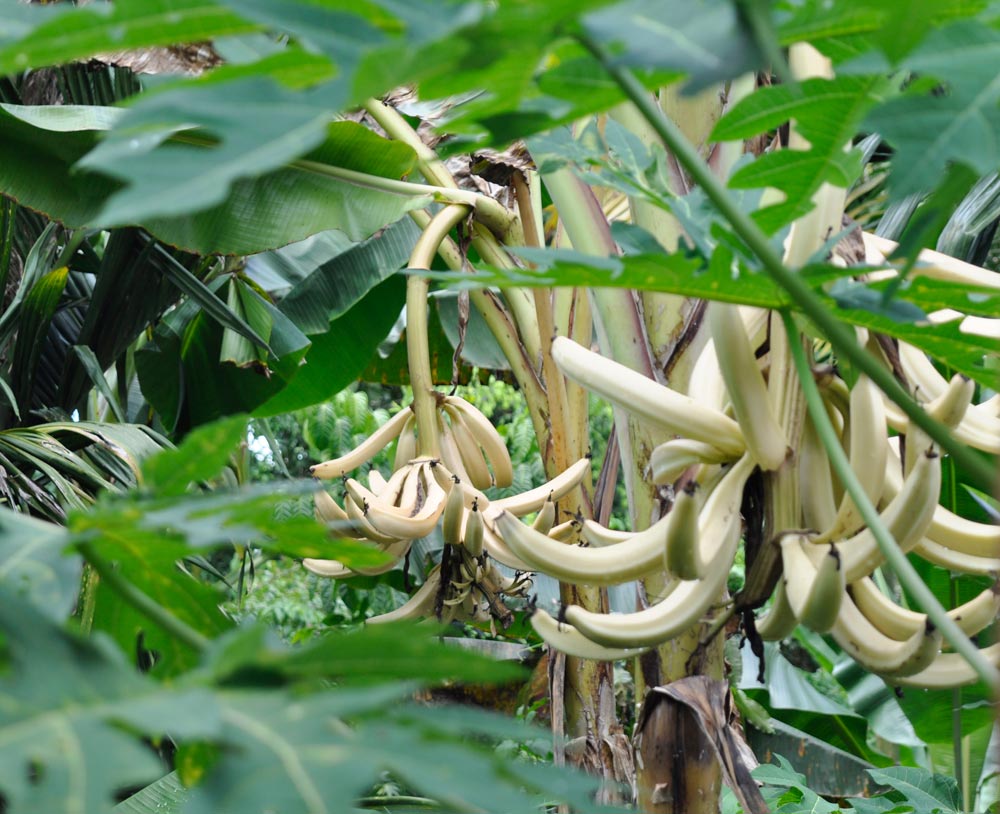 'Talasea’ is a diploid cooking banana that produces long and slender fruits whose peel is almost white with a reddish blush that fades with maturity. It was named after a district of West New Britain. In Melanesia, people who bring home new cultivars often name them after the place where they collected it or the name of the person who gave it to them. (Photo by Gabriel Sachter-Smith) 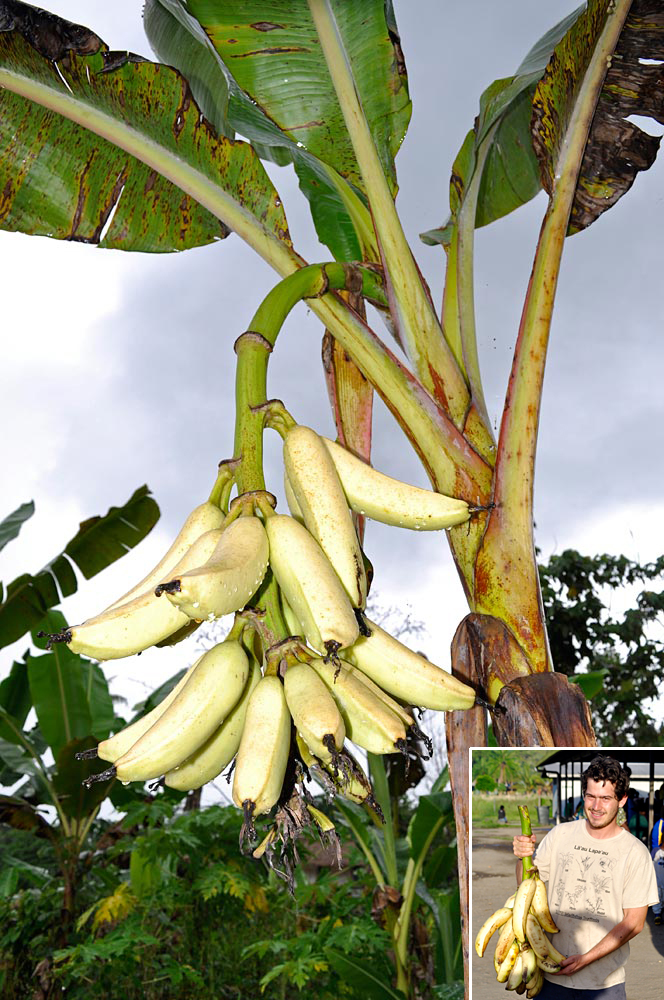 ‘Nesuri’ is a diploid cooking banana. The large, thick fruit is a favourite of the locals, and of the collecting team. In markets, it’s often called ‘Moni’ (money) for the high price it commands. In the insert, Gabriel Sachter-Smith is holding a bunch bought at the Arawa market. (Photo by Gabriel Sachter-Smith) 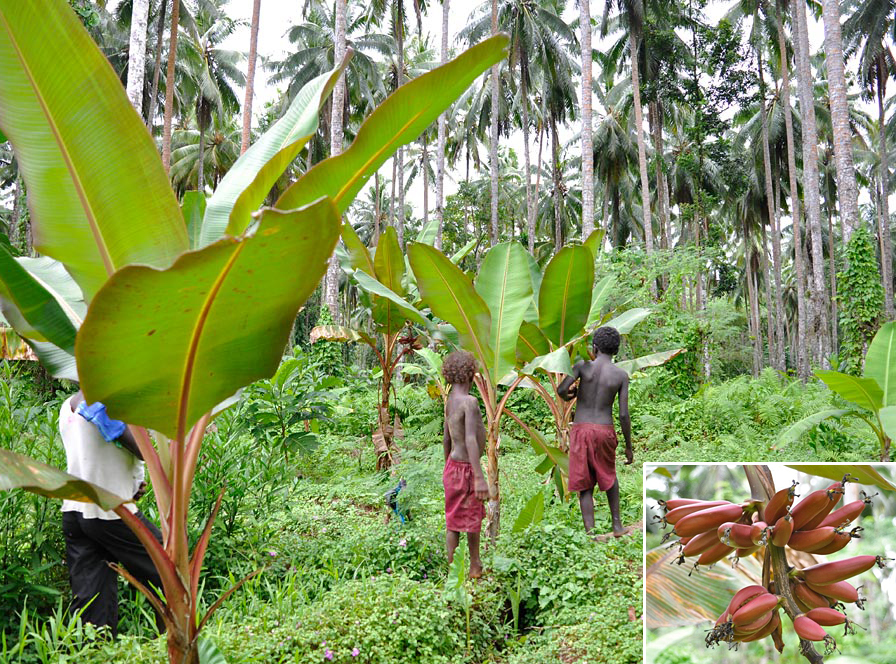 A field of ‘Sausage Banana’ plants. The diploid cultivar got its local name from the shape of the fruit (insert), which is eaten raw or cooked. (Photo by Gabriel Sachter-Smith) 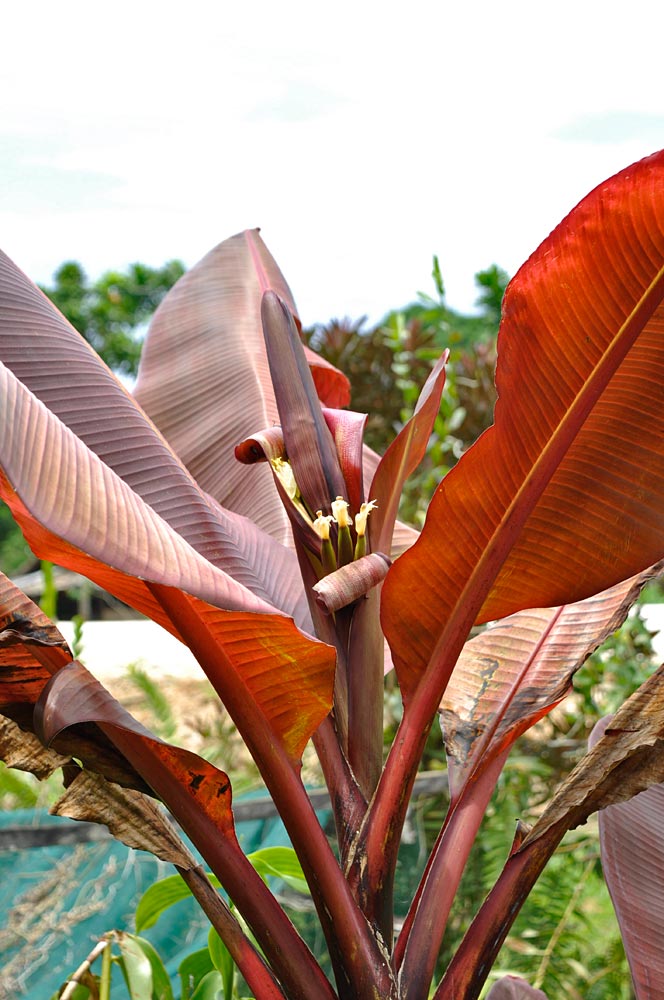 The team saw three types of red leaves banana plants, including this bright red one which they named ‘Glenda’s Red’ after the woman who kindly agreed to share suckers from her garden. She said that the plant started being seen after the civil war, which ended in 1997, as a reminder of the blood that had been shed. Grown as an ornamental (the fruit is said not to be edible), the plant does not seem to have a local name. (Photo by Gabriel Sachter-Smith) 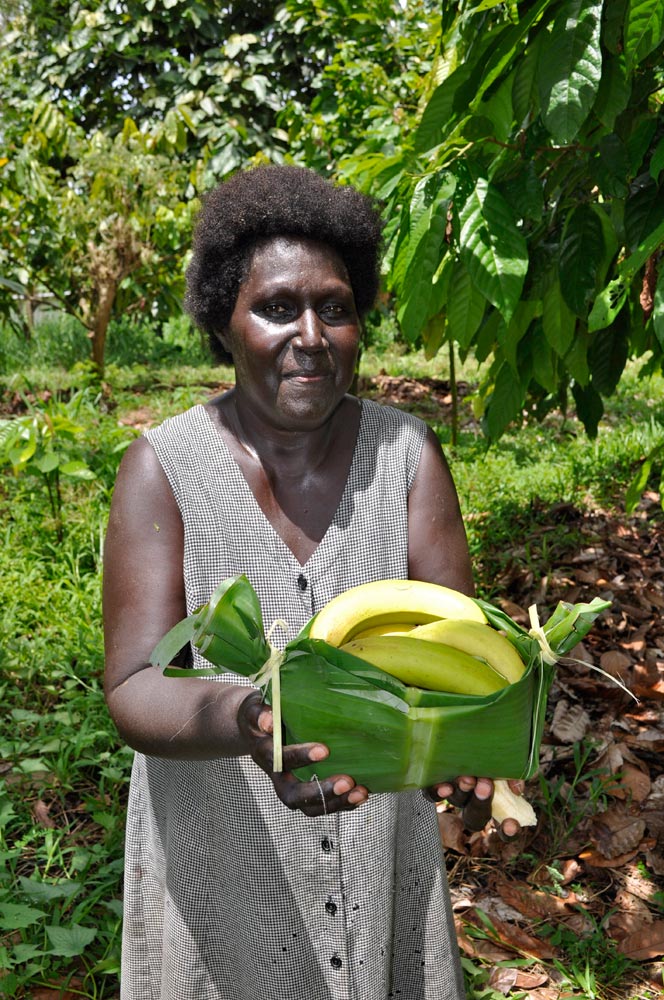 The team collected about a dozen triploid cultivars. Like the diploid bananas, most of these triploids were most certainly domesticated in the New Guinea area. But they also saw the more familiar Asian types such as Bluggoe, Pisang Awak, Silk, Gros Michel and Cavendish. (Photo by Gabriel Sachter-Smith) 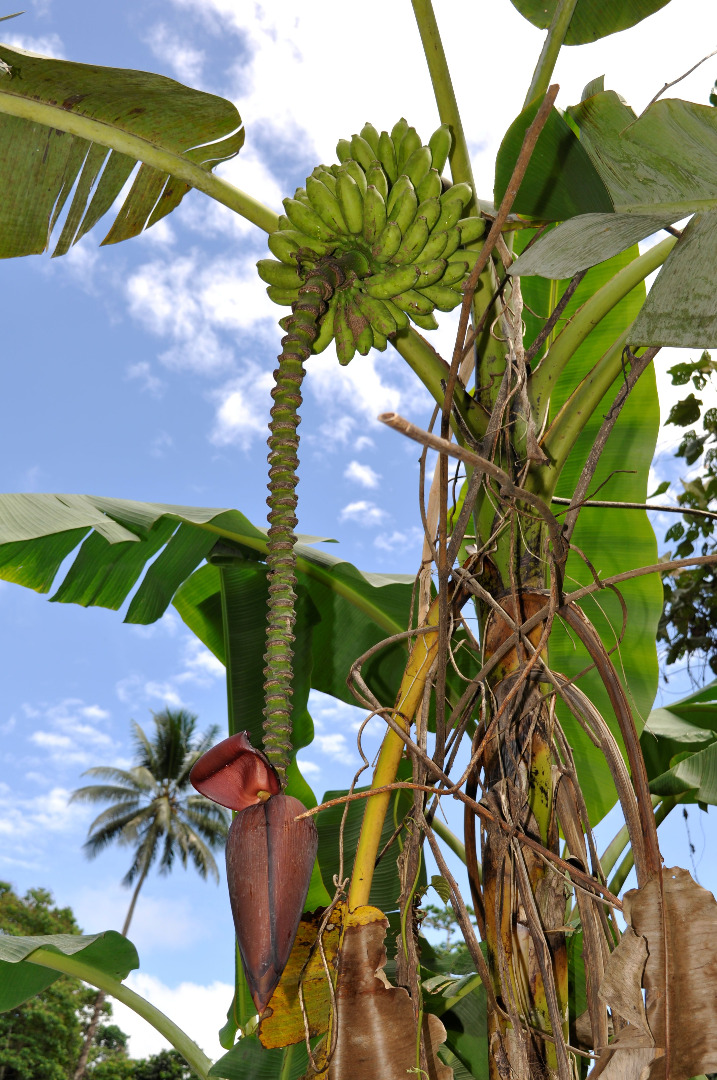 ‘Kalmagol’, a dessert banana, was commonly seen by the roadside. At first, Gabriel Sachter-Smith thought it was a Silk variant, but began to suspect it might be a tetraploid, a hunch that was later confirmed by flow cytometry measurements done at the Institute of Experimental Botany in the Czech Republic. The team collected two tetraploid cultivars. Naturally occurring tetraploid bananas (4 sets of chromosomes) are rare. They are probably the result of a mating between a diploid and a triploid that passed on its entire genome. (Photo by Gabriel Sachter-Smith) 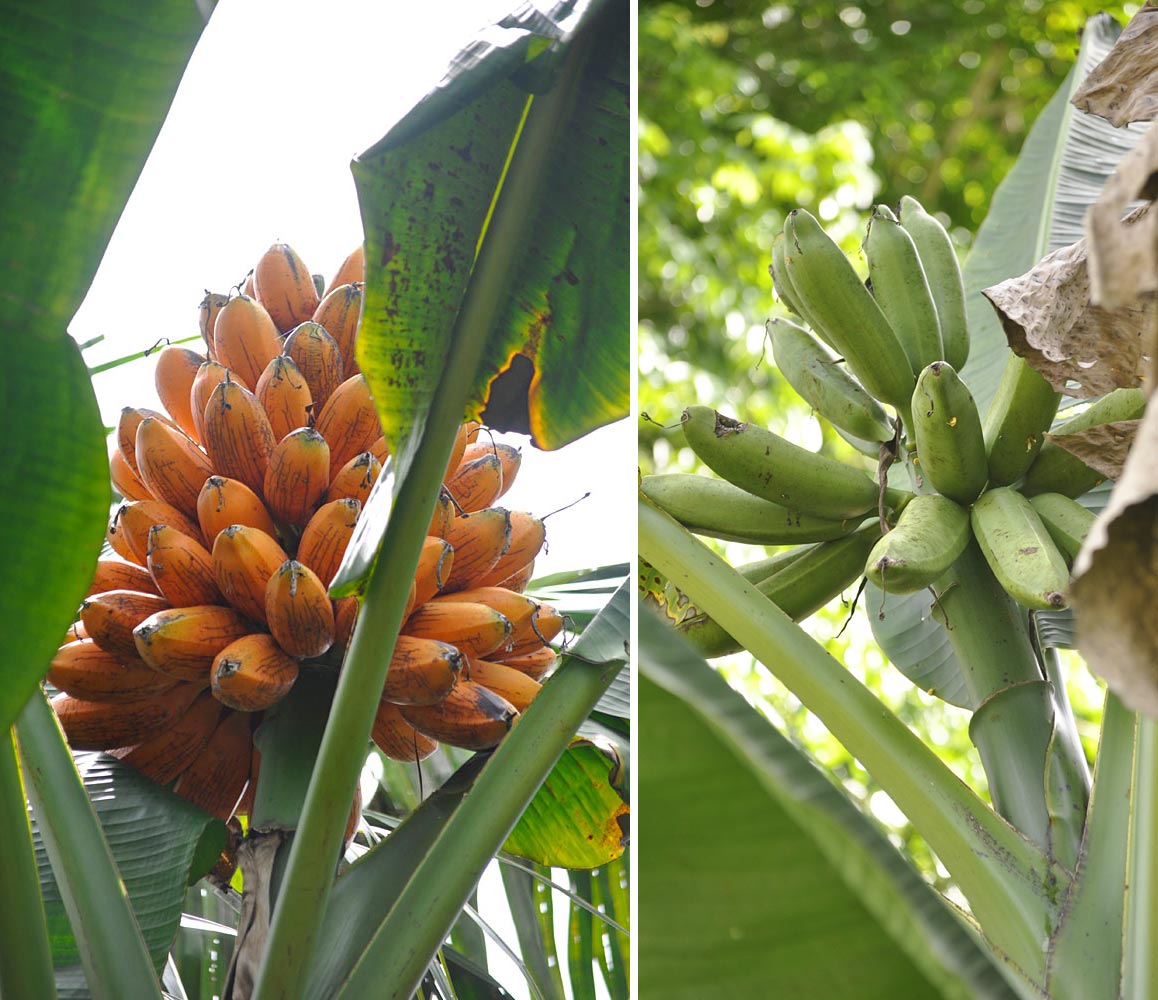 Fe’i bananas are different from other bananas in that they have an erect bunch that points to the sky. Hence the name ‘Limot’, which means “upright”, of the banana on the left. The plant was introduced from Nissan Island further north. The name of the banana on the right is ‘Kourai’, a variant of the local word for wild bananas (kaura). The team collected five Fe’i bananas bearing variants of that name. Unlike the other bananas, they could have been domesticated locally if it turns out that they are related to one or more of the islands’ native wild species. (Photos by Gabriel Sachter-Smith) 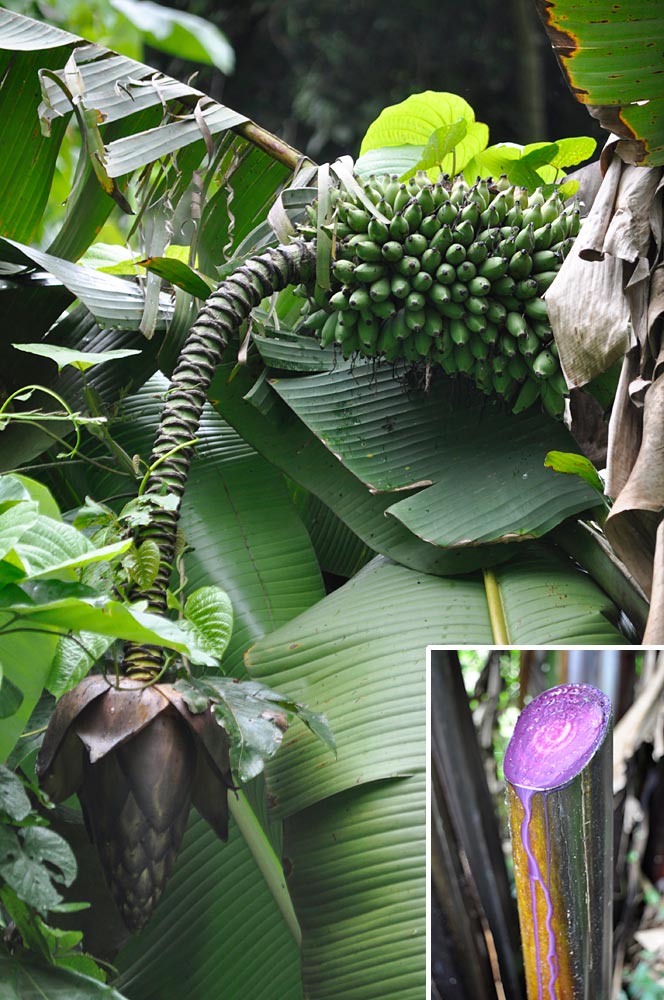 Contrary to what its name suggests, Musa bukensis is absent from Buka Island. It is mainly found in the southern part of Bougainville Island. Its purple sap (insert) is used in dying mats. (Photos by Gabriel Sachter-Smith) 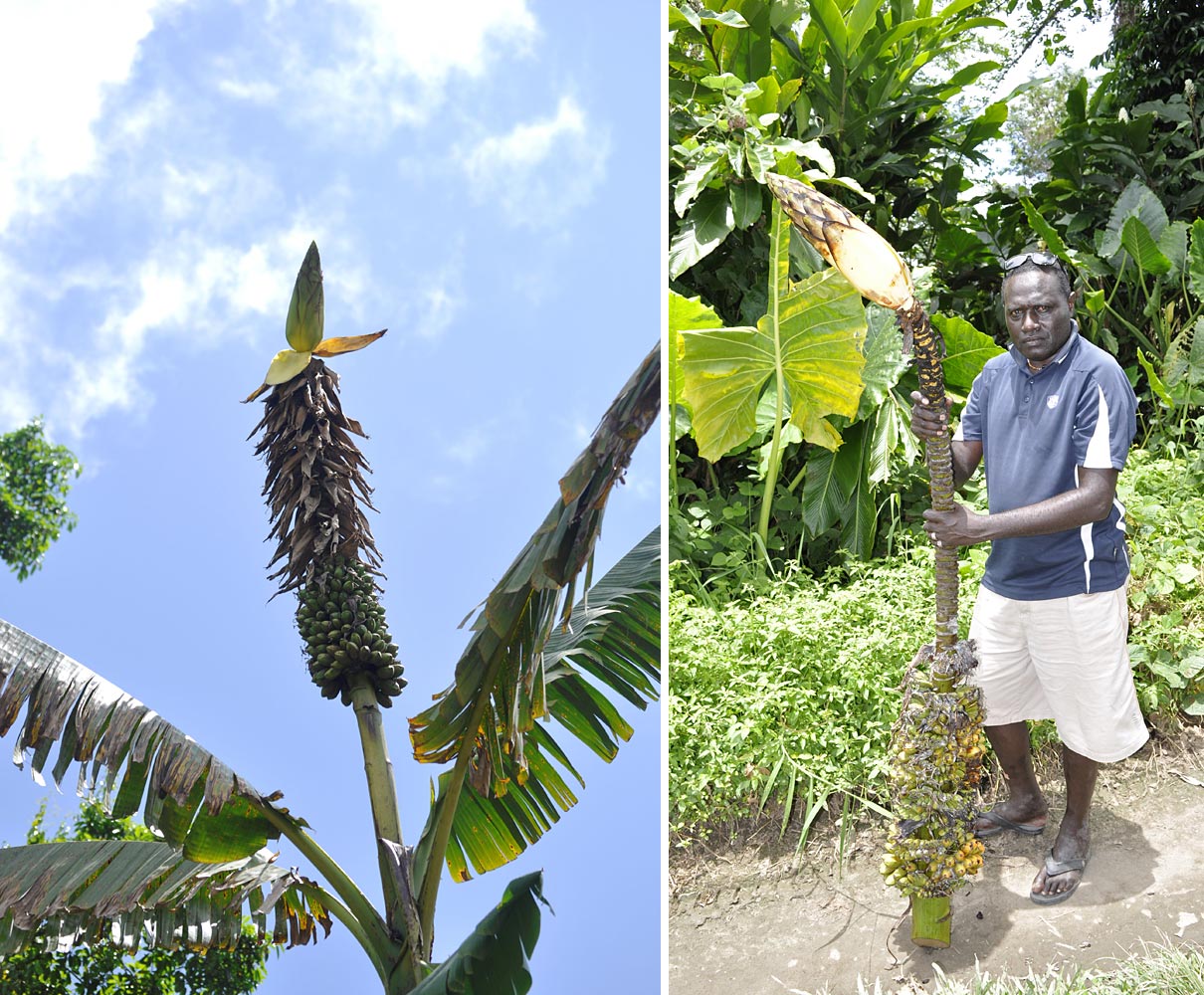 Musa maclayi subsp. maclayi var. erecta (left photo) was commonly seen on both Bougainville and Buka islands. In the southern part of Bougainville, intermediate forms (such as the one held by Zohn Bosco Miriona on the right) suggest that the two species hybridize. (Photos by Gabriel Sachter-Smith) 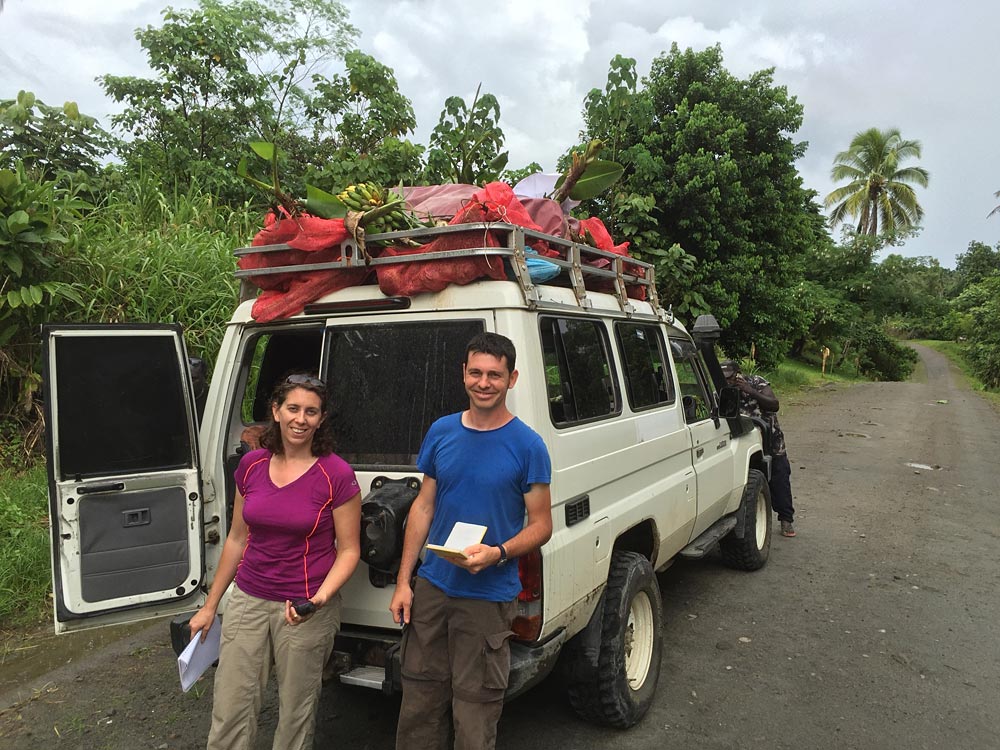 With the help of Julie Sardos and the rest of the team, Steven Janssens collected leaf samples to study the gene flow between the two wild species. When a plant was fruiting they also collected seeds, in addition to the leaf sample. The analysis of the genetic data will help determine how many seeds need to be collected to capture, for conservation, the genetic diversity of a population of wild bananas. (Photo by Gabriel Sachter-Smith)