Loading...
News and analysis » The hidden side of banana diversity

In the 1880s, consumers in the U.S. could choose from several cultivars of bananas. By the turn of the 20th century, however, the Gros Michel had pretty much cornered the market. According to the American historian John Soluri, Gros Michel largely owed its dominant position not so much to consumers as to shippers and fruit dealers who liked its large bunch, bruise-resistant peel and ability to withstand the long journey from farm to market.

The advent of self-serve supermarkets exacerbated the importance of aesthetic factors, further narrowing the number of acceptable alternatives when the Gros Michel could no longer be grown commercially because of its susceptibility to Fusarium wilt. The export industry settled on Cavendish bananas, not only because they were resistant to the disease, but also because — in the words of a United Fruit executive — they could “fool most people” into believing that they were eating a Gros Michel.

The conventional wisdom is that the export trade is dominated by a single Cavendish cultivar. Not only was it not the case when the industry switched to Cavendish. The diversity of Cavendish cultivars has since increased. This is because growers have been selecting plants displaying advantageous mutations (edible bananas do not reproduce sexually, but they still change through mutations). The diversity is essentially invisible to consumers — Cavendish cultivars tend to taste the same — but matters to growers. For example, a cultivar that is more tolerant to cold can make a world of difference to farmers in the subtropics.

Diversity tree constructed with genebank accessions of cultivated bananas and some of their wild ancestors (in green).

These two types of bananas have in common that their ancestors were introduced to Africa, possibly as early as 2-3,000 years ago. But whereas they have become locally common and diversified in Africa, they are rare to non-existent in the centre of domestication of the banana (the humid tropics that extend from India to the Solomon Islands). Why did their diversity flourish in Africa, but not in their ancestors’ native land?

As newcomers to the continent, the ancestors of Plantains and EAHBs were not necessarily adapted to all the agro-ecological conditions to which farmers would eventually expose them. Mutations that helped the bananas thrive would have been selected, although it looks as if farmers also propagated the suckers of mutant plants that simply appealed to them. Over time, the actions of farmers resulted in a high diversity of cultivars.

Meanwhile in their native land, the ancestral plants that stayed behind would have also mutated, except that farmers did not embrace this new diversity.  Xavier Perrier, a biomathematician specialising in plant diversity and evolution at the French Agricultural Research Centre for Development (CIRAD), reckons it is because they did not need to. “The niches these mutants would have filled were most likely already occupied by other bananas. There would not have been many reasons for farmers to keep variants.” 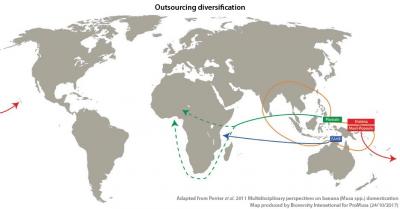 Ancient movements of ancestral bananas out of the crop’s centre of origin (the area delineated by the orange line). The dotted green lines show the possible routes that the ancestors of the African Plantains may have taken to reach western Africa.

Two types of bananas, the Maoli-Popoulu and Iholena, similarly saw their diversity increase after some cultivars were taken out of their ancestral home. Except that instead of heading west, like the ancestors of Plantains and EAHBs, they were taken east (see Outsourcing diversification). Their diversity has declined of late, but a few hot spots remain, like New Caledonia for Maolis, Fiji for Popoulus and Hawaii for Iholenas.

The more recent diversification of Cavendish bananas attests to the enduring importance of this age-old process. Growers have used it mainly to improve agronomic performance, but the emergence of TR4, the fungal strain to which Cavendish cultivars are susceptible, has opened up a new focus of selection. Since the 1990s, the Taiwan Banana Research Institute has been using its infested fields to select for less susceptible variants. These so-called GCTCVs, for Giant Cavendish tissue-culture variants (tissue culture increases mutations), are under continuous selection to decrease their susceptibility to TR4. 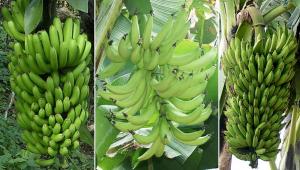 It’s difficult to know the extent of the diversity represented by these globe-trotting bananas. The Plantains and EAHBs alone are estimated to be represented by more than 100 cultivars each. Together with the Cavendish, Maoli-Popoulu and Iholena cultivars, these types of bananas could easily represent more than a third of all cultivars, whose number is estimated to be over 1,000. As high as it is, their share of cultivar diversity pales in comparison to their hold on production.

According to the 2014 FruiTrop banana stats curated by CIRAD scientist Thierry Lescot (who breaks down country stats into four categories: Cavendish cultivars, other dessert cultivars, Plantain cultivars, and other cooking cultivars), Cavendish cultivars account for 46% of global production, Plantains 15% and the EAHBs of eastern Africa 12%. Together these three types of bananas account for nearly 75% of the global production of bananas. 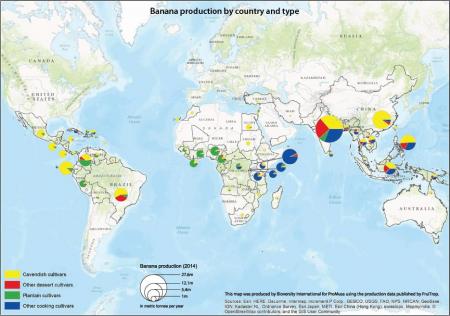 Banana-growing countries that produce 1 million metric tonnes or more. Each country’s production is allocated to four categories: Cavendish cultivars, other dessert cultivars, Plantain cultivars, and other cooking cultivars. India is the largest producer with 27.6 million tonnes.

Mapping the FruiTrop stats (see Banana production by country and type) helps visualize the extent of the Cavendish banana footprint (in yellow), not only in Latin America, which is where most of the international traded bananas are produced, but also in Asia, traditionally a stronghold of banana diversity. In fact, Asia produces 35% more Cavendish bananas than Central and South America put together, even though it exports hardly any. Only 11% of its production is exported, mostly by the Philippines, compared to 62% of Latin America’s. Although Cavendish bananas are not as widely grown in Africa, their production has increased by 55% since the beginning of the century. Cavendish cultivars now account for 20% of the bananas produced on the continent.

The footprints of the Plantains and EAHBs are more geographically restricted. Plantains (in green) are mainly grown in Africa (53% of the total Plantain production) and South America (30%). India is the only Asian country that produces a substantial share of the world’s Plantains (10%). The EAHBs do not have a category of their own, but their footprint can be visualised since they dominate eastern Africa’s “other cooking cultivars” category (in blue). This leaves as the only places that are both cultivar-rich and genetically diverse, the areas that are represented by the red and blue slices in the Asia-Pacific region, the crop’s centre of origin.