'Karat' at a glance 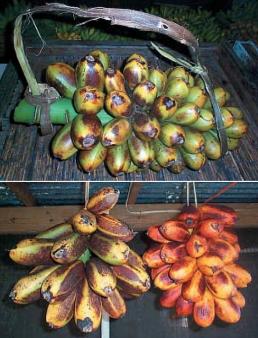 'Karat' is the name given to a distinct type of Fei banana in the island of Pohnpei, in the Federated States of Micronesia. The three known cultivars are 'Karat Kole', 'Karat Pako' and 'Karat Pwehu'1 . Once a popular weaning food for infants, karat bananas became increasingly rare until the late 1990s, when an American nutritionist, Lois Englberger, demonstrated that they were rich in pro-vitamin A carotenoids.

The origin of the word Karat is not known. According to Adelino Lorens, Pohnpei's chief of agriculture, the local name for these bananas is Met Met. Karat would be a word borrowed from German (Germany occupied the island at the turn of the 20th century). The theory is that Germans called these bananas Karat in reference to the golden of their pulp. See the comments section below for an argument in favour of Karat being a Ponapean word.

The name Karat is also given to a non-Fei banana, 'Karat En Lap', a Maoli-Popoulu type2 .

In pictures on The bananas of Pohnpei
Articles on 'Karat' in Musalit
Local names for 'Karat' in the cultivar checklist
Musapedia pages on cultivars: