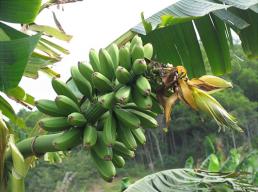 'Asupina' is a cultivar that belongs to a group of bananas domesticated in the Pacific region, the Fei bananas. Like many of the cultivars in this group, it has high levels of provitamin A carotenoid that are transformed into vitamin A in the body. 'Asupina' supplied the APsy2a gene that was introduced to a Cavendish cultivar by scientists at the Queensland University of Technology in Brisbane, Australia1 . The gene encodes the protein phytoene synthase, which plays a role in the pathway leading to the formation of ?- and ?-carotene.The proof of concept is part of a project to alleviate vitamin A deficiency in Uganda by engineering local cultivars2 .

The peel colour of the ripe fruit is orange. The texture of the fruit pulp is soft and its colour yellow/orange.

An 'Asupina' accession collected in Papua New Guinea was evaluated on-station in Australia4 . The first crop cycle took 14-15 months and the ratoon one 9-10 months. The height of the pseudostem varied from 3 to 4.5 m over two crop cycles, and the bunch weight from 5 to 20 kg. 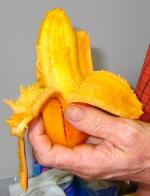 In a study comparing ten cultivars that had yellow to orange fruit with two Cavendish cultivars, 'Asupina' had the highest level of trans ?-carotene, the most important provitamin A carotenoid (1,412 ?g/100 g of fresh weight, or more than 20 times the level in the Cavendish cultivars). Consumption of 2 to 3 fingers of this cultivar could provide half of the estimated vitamin A requirements for a nonpregnant, nonlactating adult woman5 .