While Latin America is preparing for the worst, the banana community comes to grips with the news that tropical race 4 is on Africa’s doorstep.

Randy Ploetz of the University of Florida calls it a “pathogen on the move”. Ever since the so-called tropical race 4 (TR4) surfaced in southeast Asia in the early 1990s, the question on people’s mind has been where the fungal strain that causes Fusarium wilt in Cavendish cultivars would pop up next. It's safe to say that most people didn't expect the answer to be Jordan, despite rumours that the fungus had landed in the Middle East preceding the publication of the disease report. 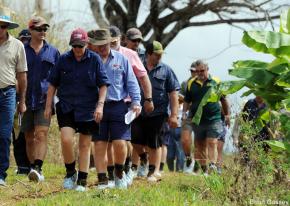 Visitors to a banana plantation in Australia are given disposable booties to avoid bringing in or taking out soil-dwelling pathogens.

“The outbreak in Jordan confirms our worst fears that TR4 would spread outside the southeast Asian region”, says Ploetz. “Although the specific event that started it is not known, we can assume that people were responsible”. Symptomless but infected suckers entering the country in somebody’s luggage is a possibility. It is also often said that the soil-dwelling fungus can hop a ride on the sole of shoes, for example. It is indeed a concern, especially for the banana industry whose staff travel between TR4-infected and TR4-free regions, hence the publication in 2011 of guidelines for travellers.

Another reason to be worried about TR4 being so close to Africa is the revelation in the disease report that the desert kingdom’s Cavendish bananas exhibited symptoms of the disease as far back as 2006. Moreover, it wasn’t until November 2011 that samples of infected plant material were sent to Ploetz, who forwarded them to Wageningen University scientists for diagnosis. To this day, Jordanian authorities have yet to put in place a plan to contain the disease.

Unfortunately, such lack of preparedness is more the norm than the exception. Even though the threat posed by TR4 has been widely recognized, few countries have taken the necessary steps to prevent the entry of the fungal strain – by designating TR4 as a quarantine pest for example – let alone set up a system to promptly detect incursions and stop the fungus from gaining a foothold. Even Latin America – whose Gros Michel-based export trade was decimated by race 1 strains during the first half of the 20th century – is not fully ready. After the industry solved its Fusarium wilt problem by replacing the susceptible Gros Michel with resistant Cavendish cultivars, research on the disease dropped dramatically, with the result that there are few viable options to manage the disease, especially for smallholder farmers. Unlike Africa, however, the region that popularized Fusarium wilt’s other name (Panama disease), and which stands to lose an important economic activity should TR4 land on its soil, has started to prepare for a possible face-off with the pathogen.

Countries where MUSALAC workshops on quarantine pests have been held.

For one, the members of the regional research network on bananas, MUSALAC, have been receiving training on quarantine pests, with a special emphasis on TR4. The workshops are organized by Bioversity International in collaboration with each country’s national plant health organization. 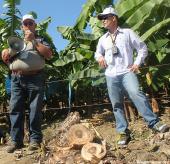 The document covers the technical and regulatory aspects that need to be taken into account by countries looking to develop their capacity in identifying and containing TR4. Among others, it includes a step-by-step description of how to confirm suspected cases of the disease, along with the protocol for the TR4-specific PCR diagnostic test developed by Dita and Wageningen University colleagues. The plan also has a section explaining how to collect and handle samples to avoid contributing to the spread of the disease. 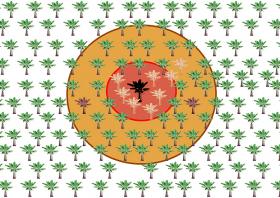 Example of a security zone to set up around a source of infection.

The authors recommend implementing measures to restrict the movement of vehicles, equipment and plant material from areas suspected of being infected with TR4 even before the disease has been confirmed. They also describe various courses of actions that can be followed to isolate infected areas. They note, however, that the establishment of quarantine areas and the ability to conduct inspections, collect samples and enforce the destruction of plants, among others, need to be backed up by government regulations specific to TR4, something none of the OIRSA member countries have done, with the exception of Panama. The authors also stress the importance of promptly making public confirmed incursions of TR4.

All eyes are more than ever on Africa and Latin America, which are still officially free of TR4. “Containing the disease buys time”, says Dita, “but it does not solve the Fusarium wilt problem. Barring the discovery of a cure, the best strategy is to prevent the spread of the fungus in the first place.” Ploetz concurs. “Hopefully, this will prompt a heightened awareness among quarantine agencies, producers and those who support research. Without tightened quarantine measures, a better understanding of the disease's epidemiology and the development of resistant bananas, TR4 will continue to spread and devastate this important crop.”

On 29 November, a press release announced that TR4 had been confirmed in Mozambique.