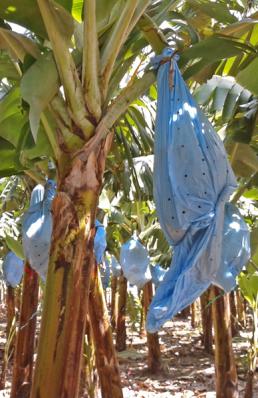 Bagging consists in placing a cover over the bunch to protect the fruit against damage caused by insects and other animals, by rubbing against the leaves or by the application of chemical products1 2 . The innovation is attributed to Carlos Gonzales Fajardo in 1956 in Guatemala. The practice has since spread to all export plantations and is considered essential to increase yield and improve fruit quality. The cover creates a  microclimate that maintains a high temperature and prevents chill damage. Depending on the study, the temperature over a 24-hour period increases on average by 0.5°C inside the cover3 and can increase by 7°C in the warmest hours4 . This microclimate can reduce by many days the flower-to-harvest interval (between 4 to 14 days depending on the type of cover and the environmental conditions) and increase bunch weight.

There are two types of bagging : traditional (the cover is placed at the last horizontal hand stage, at which time the bracts have fallen) and early bagging (when no hand is yet visible). This last practice requires removing the fallen bracts that get stuck inside the cover. If they are not removed in time, the advantages of early bagging are not realized. Where thrips are a problem, early bagging is recommended. 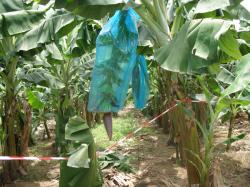 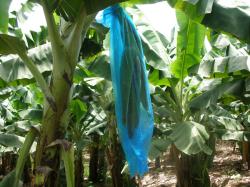 Bagging can also be associated with deflowering, the removal of false hands and tagging. Other bagging practices that can protect the bunch and improve fruit quality are: double bagging, semi-early bagging, individual hand bagging, Daypa bunch protectors and neck protectors. 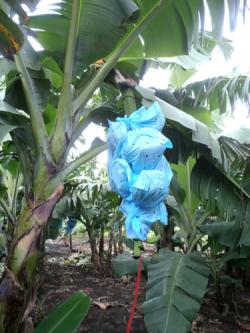 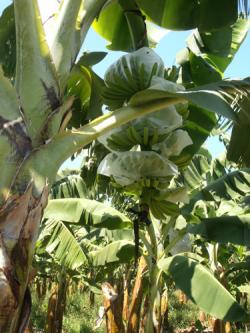 Polyethylene is the most common type of plastic used to cover banana bunches.The first models were low density but high-density polyethylene covers that are thinner but more resistant have since been developed. They are better suited for early bagging. They also maintain an elevated temperature for a longer period of time.

The presence of holes is important to prevent the multiplication of fungi. In the absence of perforations, the relative humidity inside the cover is too high. The size of the holes varies: 12.7mm every 76 mm, 8 mm, 6 mm every 10 cm, 3 mm or micro-perforations.

The thickness of the cover does not affect its efficiency. It mainly has an impact on its cost and the environment. It also depends on the local wind and temperature conditions. The thickness is generally between 12 and 25 µm. Studies have reported that above 130 µm, the covers offer a better protection against the cold but is can cause malformations and sunburns.

Various colours have been tested (pink, green, blue, white and black) as well as the transparency of the cover. The colour acts as a filter of photosynthetically active radiation (PAR), the wavelengths between 400 and 700 nm that are used during photosynthesis. The industry usually uses blue or transparent covers. Blue covers let in 73% of the wavelengths in the PAR, whereas transparent ones let in 93%. Nevertheless, blue covers produce heavier bunches because it lets in the heat without causing burns because it blocks UV rays. In the Canary Islands, for example, blue covers are also preferred at high altitudes. Blue covers also do not harden the peel one of the disadvantages of bunch covers. Some transparent covers treated to block ultraviolet and infrared rays also perform as well as blue covers. 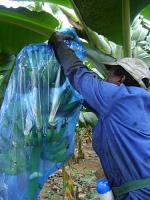 The bottom opening of the cover is sometimes closed. The impact of this practice is unknown. Depending on the perforations, it could interfere with the aeration of the bunch.

To better protect against insects, covers impregnated with insecticides were developed in the 1970s. Concentrations of 0.5, 1 and 2% are effective against aphids, thrips, moths and beetles. The insecticides used are chlorpirifos (1%) or bifenthrine (0.1%).

Some plantations, such as those managed by Dole, have reduced their used of covers impregnated with chlorpirifos. Instead insecticide impregnated stripes are inserted inside the cover. New molecules, such as buprofezin, are being tested and could further reduce the use of chlorpirifos, except when no alternative is yet available, as against scale insects.

Covers impregnated with a mixture that includes cloves, garlic and pepper is used in organic production.

Many plantations reuse or recycle the plastic covers. When the workers select the bunches to be harvested, they lower them and carefully lift the bag in order to avoid damaging it. The plastic covers are put in a large bag and taken to a collection centre, where they are sorted. Those that can be reused are pre-washed in water and soap and transferred to a tank for a long period to remove stains and debris. They are then wrung to remove excess water and hung on a line for drying. Once dry, they are stored in large bags for 4 weeks before being reused. The plastic covers are reused 3 to 4 times, after which they are sent to a plastic recycling facility to be turned into corner boards (edge protectors). Burns caused by the cover rubbing against the fruit. 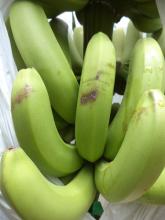 Damage caused by leaves rubbing against the fruit. 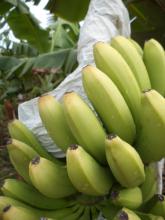 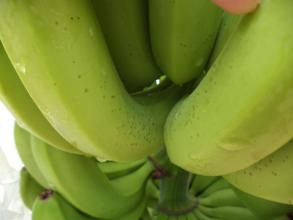