Loading...
Under the peel » Probing the banana diversity of Bougainville 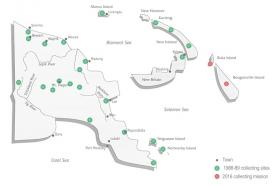 I didn’t know what to expect from spending two weeks in Bougainville—an autonomous region of Papua New Guinea (PNG)—to collect bananas. I was excited at the prospect of returning to Melanesia, where I had spent a year collecting root and tuber crops in Vanuatu back in 2005. Except that two weeks is not a lot of time for this kind of work. Moreover, Bougainville is part of a region that had been extensively surveyed during 4 collecting missions at the end of the 1980s (see map). The reason Bougainville was not visited at the time is because it was going through a period of civil unrest.

In 2016, the Crisis had been over for several years and visitors were once again welcomed. It was an obvious place to scout out, but how much new material could we realistically find given that more than 240 accessions had been collected in the1980s? Quite a lot it turns out. Our team of 6 people1 collected 61 accessions of cultivated and wild bananas in the form of suckers that have since been introduced to PNG’s National Agricultural Research Institute (NARI) field collection with an AROB accession code. A photo story features some of these bananas. For more photos, you can browse the catalogue produced by Gabriel Sachter-Smith.

For each accession, we also sent fresh leaf material to the Institute of Experimental Botany’s Musa Genotyping Center for SSR genotyping and establishing ploidy (the number of copies of each gene-bearing chromosome: 2x, 3x or 4x). On arrival, scientists were able to extract DNA from 60 of the leaf samples. But despite our best efforts to keep the samples from spoiling before they could be shipped, 13 of them were not in sufficiently good condition to verify, using flow cytometry, the ploidy estimated by the expert eyes of Janet Paofa and Gabriel Sachter-Smith. Merging the genotypes of the 60 accessions with a core dataset of 583 accessions of known classification (the results of which have recently been published) not only clarified the identity of puzzling accessions, it also raised tantalizing questions.

One of the particularities of the PNG region is the continued cultivation of so many diploid (2x) cultivars, nearly half of the Bougainville accessions. Elsewhere, diploids tend to be rare, having been replaced by the more productive and hardier triploid (3x) bananas to which they gave rise.

When the Bougainville accessions with a Musa acuminata background (designated by the letter A) were merged with the core dataset, most of the AA diploid ones ended up among the PNG AA diploids in the resulting diversity tree. Since Musa acuminata has never been reported in Bougainville, the diploids cultivated on the island were necessarily introduced, most likely from PNG or nearby areas where their wild diploid ancestor, Musa acuminata ssp. banksii, is present. But it’s possible that some of the cultivars have been ‘fine-tuned’ by local farmers selecting plants that spontaneously mutated. 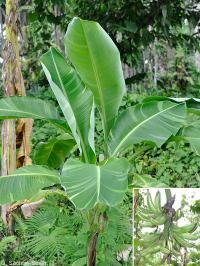 Take ‘Tambra’, for example. Molecularly, it is indistinguishable from ‘Morou’, but morphologically it is different in having white stripes on its leaves and fruits (see photo). Since variegation is the result of a mutation in the chlorophyll biosynthesis pathway, ‘Tambra’ is in all likelihood a mutant of ‘Morou’ that was selected for its attractive look. But whether the selection happened in Bougainville is a question that cannot be answered with SSR markers.

Three triploid AAA accessions from Bougainville (‘Laguai’, ‘Banawa’ and ‘Korupari’) also clustered among the PNG AA diploids in the core dataset. This suggests that these triploids are the product of crosses between edible diploids possessing a similar banksii background. Triploid AAA cultivars usually have a more complex genetic background that bears the signature of different subspecies of Musa acuminata. This is because a plant that is the product of hybridization between subspecies, and even more so when the species are different, is more likely to pass on both copies of its genome (a phenomenon called meiotic restitution) when it is its turn to mate.  When it happens and the other diploid parent passes on the usual one copy, the result is a triploid plant. It’s not clear what drives this process in diploid bananas that have a more homogenous genetic background. Again, whether any of these AAA triploids were generated in Bougainville remains an open question.

Another triploid, ‘Totoi’, clustered with Musa schizocarpa, a wild species whose genetic signature has also been found in banana cultivars, albeit only in diploid ones (AS). If this finding is confirmed, it would be, to my knowledge, the first record of an AAS cultivar. 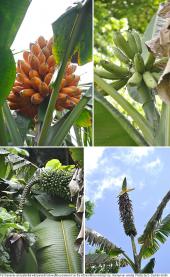 The main limitation of our set of 19 SSR markers is that it is not optimized for the study of Fe’i bananas, an unusual assemblage of cultivars easily recognized by their erect bunch. This is because these cultivars and their unknown parents, which belong to a different section of wild species, were not represented in the core dataset used to develop the SSR markers. This would explain why we were unable to determine whether the five accessions of Fe’i bananas we collected were related to one or both of Bougainville’s native wild species: Musa maclayi subsp. maclayi var. erecta and Musa bukensis.

Our results show that Bougainville, and the greater PNG area, have not revealed all their secrets yet. Our observations also suggest that farmers in the region actively manage the diversity of their bananas, making it a good place to set up mechanisms to support their on-farm conservation.

In addition to Janet Paofa, without whom the collecting mission would not have happened, I would like to thank Jeff Daniells for his valuable advice before leaving for Bougainville. Jeff was one of the scientists who participated in the 1980s PNG collecting missions.
1 Collecting team: Janet Paofa (curator of the NARI banana collection in Laloki), Gou Rauka (phytopathologist at NARI in Lae), Gabriel Sachter-Smith (member of MusaNet's Taxonomic Advisory Group), Steven Janssens (research fellow at the Botanic Garden Meise in Belgium), Julie Sardos (associate scientist at Bioversity International in France and co-chair of MusaNet's Diversity Thematic Group) and local guide Zohn Bosco Miriona.
Further reading

Collection of new diversity of wild and cultivated bananas (Musa spp.) in the Autonomous Region of Bougainville, Papua New Guinea