Loading...
Under the peel » Incomplete systemicity: a helping hand in the fight against Xanthomonas wilt of banana

The banana’s vegetative reproduction strategy —offshoots called suckers growing around the main stem— is an ideal vehicle for the dissemination of pests and diseases. When a sucker is taken from a mat (the rhizome, the main stem and the suckers) and transplanted somewhere else, the pests and pathogens it harbours are also taken along. When the pathogen is the kind that kills its host (like the fungus that causes Fusarium wilt) or renders it unproductive (like the virus that causes bunchy top), the consequences can be devastating. The advice for those pathogens is to uproot every mat showing signs of disease since it is now a source of inoculum. Except that smallholder farmers tend to hold on to a mat, as in this example from bunchy top where farmers resisted uprooting mats in which only one stem was visibly diseased, possibly in the hope that the symptomless stems would later bear fruits. 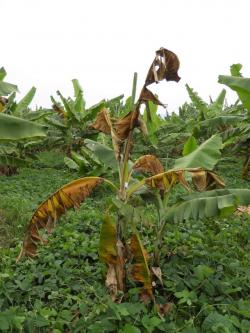 A banana plant infected with BXW and its attached sucker. (Photo by Guy Blomme)

When the causal agent of Xanthomonas wilt of banana — a lethal bacterial disease better known as BXW— was first reported in Uganda in 2001, uprooting the mat featured high among the recommended control measures. Not surprisingly, surveys done in the early days of the BXW epidemics showed that farmers were reluctant to remove a mat when only the main stem exhibited symptoms of the disease. They were more likely to cut off the diseased stem than dig up the mat.

My colleagues and I were sceptical. Based on the behaviour of other pathogens, we expected the bacteria to move from the infected stem to all the attached suckers in the mat. On the other hand, we had started hearing that mats, which had previously shown signs of disease, had resumed producing bunches. To find out what was going on, we and other scientists from IITA and Bioversity International retreated to Kifu forest, in Mukono, Central Uganda, where it was easier than in farmers’ fields to protect the plants from uncontrolled infections. We set up experiments in which different plant parts of two cultivars, Mbwazirume and Kayinja, were inoculated with the bacteria. When they were injected in the inflorescence, for example, the main stem predictably rotted away. But contrary to expectations, nearly all the first and second generations of suckers went on to produce healthy bunches.

The other phenomenon is latent infections, which is when suckers are infected but do not show symptoms (15 to 43% of the asymptomatic suckers that were sampled had trace amounts of bacteria). Moreover, the percentage of latently infected suckers in a mat tended to be lower in subsequent generations. The Kifu forest studies showed that, over time, mats will recover from the disease under the combined effects of incomplete systemicity and latent infections, as long as fresh infections are prevented by removing the male bud after the last hand has set and observing good sanitation to ensure that bacteria are not present on cutting tools.

The Kifu forest studies provided the scientific justification for testing in farmers' fields what became known as the single diseased stem removal (SDSR) technique. SDSR means that each time a stem is visibly diseased, it is cut at soil level, a practice that gradually reduces the bacteria levels in mats and farmers’ fields when it is used in combination with preventive measures. SDSR was tested over a period of 4 years in the North and South Kivu provinces of the Democratic Republic of Congo. Within a month, the percentage of symptomatic plants in the eight experimental sites had declined to below 10%, and to 1% after 10 months, even in plots where more than 80% of the plants were infected at the beginning of the trial. SDSR also sidesteps the need to replant that uprooting a mat creates.

We also evaluated whether symptomless suckers (BXW-free or latently infected) sourced from diseased fields could be used as planting material if farmers do not have access to clean sources. In field trials in eastern DR Congo, less than 5% of symptomless suckers eventually developed symptoms, an economically viable level as long as the diseased stems are promptly removed and new infections are prevented. Of course, this should only be done in areas where the bacteria are already present.

Farmers, however, should resist the temptation to generalize to other diseases. In the presence of Bunchy top, which is spreading in Africa, or the especially virulent form of Fusarium wilt associated with TR4, which has found its way to Mozambique, removing only the visibly diseased stems is not a viable option. The mat needs to be uprooted and suckers cannot be used as planting material.

This blog was written in collaboration with Walter Ocimati.

About the authors: Guy Blomme and Walter Ocimati are scientists at Bioversity International. They work on banana system intensification in East Africa, with a special focus on diseases.