Loading...
Under the peel » TR4 and China’s boom and bust banana sector

Commercial banana production is relatively new in China. In an article published in the latest issue of Ecología Política (and on which this blog is based) my co-authors and I explored the important role of tropical race 4 (TR4) on the history, land use and labour relations in the Chinese banana sector.

Up until the 1980s an open market for agricultural commodities, including bananas, was virtually non-existent in mainland China. As private business became allowed, some trade in bananas emerged between the producing zones in the South (mainly Guangdong, Guangxi, Yunnan, and Hainan) and the Northern areas of China. In the North, bananas were a novelty and expensive. At the time, one would buy bananas as a gift when visiting friends, family, relatives. 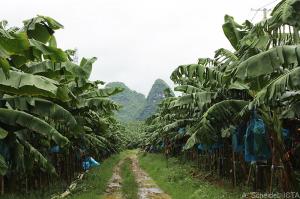 Banana plantation in the Guangxi autonomous region of China. (A. Scheidel, ICTA)

The emerging trade stimulated the cultivation of bananas, particularly through tradesmen who encouraged peasant producers in Guangdong, Fujian and – to a lesser extent Guangxi – to grow more bananas. This led to an expansion of banana production as a cash crop grown by increasingly market-oriented peasant producers using local Cavendish varieties. Quite a number of these small-scale farmers managed to reinvest their profits in renting land from neighbours and relatives migrating to urban areas.

The rising demand and continuing high prices in the northern Chinese market throughout the 1990s turned banana into an interesting investment opportunity for other people with more capital available. With disease-free planting material now readily available through commercial tissue-culture laboratories, banana production was no longer the exclusive domain of peasant-farmers.

TR4, the fungal strain that causes Fusarium wilt in Cavendish bananas, entered the scene as large-scale plantations were being developed. By affecting supplies, the disease caused prices to rise, in turn making banana even more attractive to investors. This feedback loop intensified from 2008 onwards when crises on the international financial and food markets pushed investors in the industrial, manufacturing and mining sectors to look for new investments.

New plantations were set up in Guangxi and Yunnan, as well as across the border in Myanmar and Laos. The boom was bound to be of short duration however. Lucrative at first, the new plantations either led to an oversupply on the market, or were quickly forced out of production as the fungus followed the bananas. Investors went either bankrupt, or looked, once again, for new areas of expansion.

The phenomenon shows similarities to what happened in the first half of the twentieth century, when American banana companies in Central America responded to the Fusarium wilt epidemic affecting their Gros Michel plantations by ever moving to other areas. This dubitable management strategy was described by environmental historian John Soluri as ‘shifting plantation agriculture’. In this earlier episode, companies had enormous land concessions available, obtained from national governments. Chinese investors however must engage in other ways of gaining access to new land. A company must be constantly surveying for new land if it wishes to sustain its planted area.

Impact of TR4 on land use…

In rural China, land is owned by the village or brigade collective. Peasant households enjoy the land?contract rights as a result of the Household Responsibility System, while land?use rights are transferable. This kind of transfer is promoted by the state now in order to facilitate modern agriculture. A surveyor can thus negotiate with individual households or, more efficiently, target village officials in an effort to convince them to cede use rights over village lands for a given amount of time. 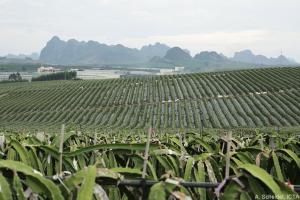 The bananas in TR4-infested plantations are often replaced by dragon fruits. (A. Scheidel, ICTA)

On the one hand, this form of negotiated access—limited to use rights only—restricts a company or plantation owner’s full control over the plantation territory. A specific example is the road infrastructure within and between different plots. Remaining outside direct control, plantation management faces strong practical limits to the possibility of implementing strict quarantine procedures. This in turn is likely to further hasten the spread of the fungus.

On the other hand, this system of land access also limits the responsibility and investments of a company regarding the protection and restoration of the ecological conditions for production, including long-term maintenance of the soil and the ecosystem.

Finally, this mode of ‘shifting plantation agriculture’ implies a land use change not only towards, but also away from Cavendish production. One of the crops that tends to be planted in TR4-infested soils is dragon fruit, another crop grown under monocropping conditions that, while having a higher market value, requires even more external input.

TR4 also changed the labour market. After decades of one-child policy and rural-urban migration, investment in banana plantations takes place amidst a labour market in relatively short supply. According to field interviews we conducted, local peasants, especially the younger generations, have become much less willing to engage in heavy physical work. For daily operations of plant and fruit care, companies and small enterprises therefore try to attract so-called worker couples formed of two people (often, though not exclusively, husband and wife) coming from remote and poor agricultural areas . These migrant worker couples are claimed to be more focused and motivated than locally mobilized and individual workers. Hence, they are considered to constitute a more stable and efficient unit of production, a type of labour that is easier to manage.

Fusarium wilt also enters into the negotiation. Payment is predominantly based on the amount of bananas produced at the end of the season on the plot assigned to the couple. A worker couple with some experience in banana production however would be quick to recognize symptoms of the disease and refuse to work there. While this indicates agency and a certain strength in negotiation on the side of labour, capital is not without response. Difficulties in mobilising a cheap and ‘professional’ workforce is a key motivation to set up plantations in Laos and Cambodia, where workers are considered to be more readily available. As stated by a senior company staff member: “For the people we can find solutions, for Fusarium we don’t”. 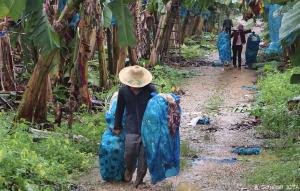 Where there are no cableways, partly because the presence of TR4 discourages investment in infrastructure, workers have to do all the heavy lifting. (A. Scheidel, ICTA)

The practice of shifting plantation agriculture also has a direct impact on working conditions. With the expected life-span of a plantation not extending beyond six to eight years, companies limit the investments they make on the land. A concrete example is that it makes little to no sense to invest in cableway infrastructure for harvest, as is common in large-scale plantations in Central America and the Philippines. Harvest work is commonly done by travelling harvest teams, hired for their services by growers and companies. In the absence of cableways, workers try to optimize their income by carrying as many bunches as quick as possible to the mobile packing units. In practice, this means men and women of the harvest teams spend the day speeding through the plantations charged with bars on their shoulder loaded with two full bunches of bananas - together weighing up to 60kgs!1

Prices crashed in 2015. Domestic oversupply from the peak in planted areas was aggravated by an increase in banana imports from traditional producer countries like the Philippines and Ecuador where a diverse range of Chinese importers linked up with small and large producers and traders. But increasingly also from Myanmar and other neighbouring countries in Southeast Asia as a result of Chinese investments. Today, profitability in the Chinese banana sector appears to be at a low point. Or in the words of a senior executive of the major banana company we visited: “Before only banana men had nice cars, now maybe they should rather be driving in small trucks”.

Both the causes and consequences of these booms and busts come forth from the interconnected histories of farmers and banana plants, investors and management strategies, workers and fungi. Only an enhanced dialogue between scientists from both the natural and social sciences can help address the challenges posed by TR4.

Robin Thiers is FWO Research Fellow at Department of Conflict and Development Studies at Ghent University in Belgium. He wrote this blog in collaboration with Juan Liu from the Institute of Environmental Science and Technology (ICTA) in Barcelona, Spain, and Northwest A&F University in Yangling, China, Grettel Navas and Arnim Scheidel from ICTA, and Haifei Mou from the Biotechnology Research Institute of the Guangxi Academy of Agriculture Sciences in Nanning, China.

Adapted from an article published, in Spanish and English, in Ecologia Politica, with the permission of the journal.

1 For more on the impact on the porters' health, see page 30 in Farquhar, I. 2012. Bananas in China. Report for Banana Link UK and the Steering Committee of the World Banana.
Related stories
More stories…