Philippines at a glance 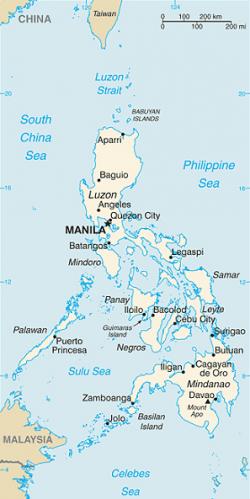 The Philippines is one of the top five exporters of bananas, with some 2.85 million metric tonnes exported in 20178 .

At the beginning of the century, as many as 90 cultivars were estimated to be grown for local consumption9 .

Regions and provinces of the Philippines

In 2018, 84% of the bananas (and 99% of the Cavendish cultivars) were produced on the island of Mindanao, with Davao region, Northern Mindanao and Soccskargen as the top three regions.7

The main Saba-producing regions were Davao region, Soccskargen and Northern Mindanao on the island of Mindanao, and Cagayan Valley.7

The main Lakatan-producing regions were Soccskargen, Davao region and Northern Mindanao on the island of Mindanao.7

In 2018, more than 4.9 million metric tons7 of Cavendish cultivars were produced on some 88,667 ha6 . Cavendish cultivars are grown in small to large commercial plantations for the domestic and export markets. Export bananas are produced by Filipino-owned firms and multinational corporations. The small- and medium-scale farmers producing bananas for export either sell to multinationals or directly to traders. A small portion of the country's exports are organic bananas.

Smallholder farmers commonly grow bananas primarily for home consumption in backyard gardens. They grow a diversity of dessert and cooking cultivars depending on their preferences and the ease with which they can be produced.

In small plantations, bananas are grown as monocrops in areas ranging from 2 to 20 hectares. The cultivars are selected based on local consumer preferences, the prevailing agroclimatic conditions and the types of pests and diseases present.

The tropical race 4 strain that causes Fusarium wilt in Cavendish cultivars, was confirmed in 200510 . The isolates had been collected from banana farms in the Davao Region, which occupies the southeastern portion of Mindanao11 . TR4  impacts both large commercial growers and smallholder farmers growing Cavendish for the export market12 .

The extent of the damage in the large Cavendish plantations for export has not been documented, but evidence suggests that the disease has taken a toll. In 2016, the Japanese company Itochu announced that it plans to invest US$57.7 million) in its Philippines subsidiary, Dole International Holdings, to increase productivity13 . The subsidiary reported a 30% decline in production, to about 540,000 tonnes, between 2012 and 2015. The goal is to raise production to about 850,000 tonnes through irrigation, the planting of more resistant material (most likely GCTCVs) and relocation of farms "to sites with better soil", by which it probably means TR4-free soils.

In 2013, the Mindanao Banana Farmers and Exporters Association, which represents small-scale farmers growing Cavendish cultivars for the export market, has reported that about 5,900 hectares of their members’ aggregate plantation area had been infected, including 3,000 hectares that have been abandoned14 .