'Pei Chiao' at a glance 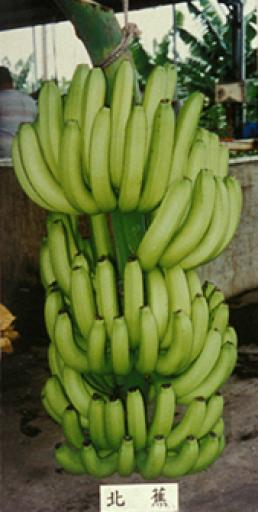 'Pei Chiao' is the name given in Taiwan to a Giant Cavendish clone introduced from southern China in the 18th century. It was mainly grown in home gardens until the beginning of the 20th century, when it became Taiwan's main commercial cultivar.

Like other Cavendish cultivars, it is susceptible to tropical race 4. However, somaclonal variants of 'Pei Chiao' selected by the Taiwan Banana Research Institute (TBRI) have been found to be resistant to the pathogen. Two of these, 'GCTCV-218' and 'GCTCV-215-1' have been registered for commercial production.

According to TBRI, its pseudostem is green with brownish blotches. A mature plant is about 270 cm tall and takes about 12 months to grow from planting to harvest. Average bunch weight is 25 kg.

Articles on 'Pei Chiao' in Musalit
Musapedia pages on cultivars:

To browse accession-level information on 'Pei Chiao' in MGIS