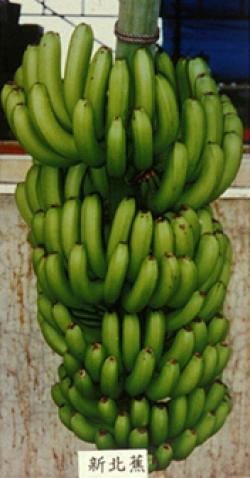 'GCTCV-218' is a 'Giant Cavendish' tissue-culture variant selected by TBRI for its resistance to Fusarium wilt tropical race 4 (TR4), which causes disease in Cavendish cultivars. Its commercial name is 'Formosana'.

The clone was first noticed by a Taiwanese banana farmer who had observed that plants he had obtained from a neighbour did not succumb to Fusarium wilt1 . He was able to trace them to a somaclonal variant of the 'Giant Cavendish' clone 'Pei Chiao' that had been distributed by TBRI.  After informing TBRI, the resistance of the somaclonal variant was confirmed in subsequent field experiments and the selection was designated 'GCTCV-218'. It was registered under the name 'Formosana' in 2002 and has since been replacing 'Tai Chiao No. 1', another 'Giant Cavendish' tissue-culture variant registered for commercial planting, but rumours of its low acceptance in the Taiwanese market, have affected the exports to Japan2 .

Compared to 'Pei Chiao', 'GCTCV-218' is about the same height, 2.8 m tall, but has a more robust pseudostem, stronger petioles and thicker leaves1 3 . Its growth cycle is slightly longer (13 months compared to 12 months) and the compact cylindrical bunch heavier (30 kg compared to 21 kg). Its bunch has on average three more hands that are more uniform in size, with slightly less curved fingers. The fruits ripen normally and evenly, with sweetness, flavour and shelf life very similar to that of 'Pei Chiao'.

Like other Cavendish cultivarss, it is also resistant to race 1 strains of the Fusarium fungus and susceptible to black leaf streak and bunchy top. However, it appears to be more vulnerable to banana flower thrips, causing corky scab symptoms on the fruits.

In a three-year field trial In Australia's Northern Territory, it was found to be as susceptible to TR4 as the Cavendish cultivar Williams4 .

'GCTCV-218' follows the same recommendations for field management as 'Pei Chiao'2 . When targeting a certain harvest time, growers should take into account its slightly longer growth cycle. It is not recommended to plant it in farms with poor drainage or insufficient water supply, or in very sandy or acidic soils. Under such circumstances, plant growth and level of resistance to Fusarium may be reduced.