Loading...
Under the peel » Gros Michel or Cavendish, which is the yummiest banana?

The complaint that the bananas sold in the US and Europe don’t taste as good as they used to will be familiar to many. It comes up nearly every time the 'Gros Michel' cultivar, which dominated the international trade until the 1950s, is mentioned in a piece about the threat faced by the Cavendish cultivars that replaced it.

I had no reason to doubt that 'Gros Michel' was the better fruit until I tasted one in Uganda, where it is called 'Bogoya'. I thought it tasted like the Cavendish cultivars I am familiar with. Of course, my reaction should be put in the same category as the online testimonies of people describing their experience of eating a 'Gros Michel' banana and concluding that it tastes better than a Cavendish cultivar. It carries little weight unless both types of bananas are sampled together in a blind taste test to prevent preconceived ideas from influencing the judgment of the taster. 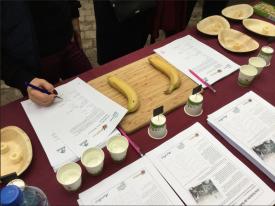 An opportunity to compare 'Gros Michel' with a Cavendish cultivar in a blind taste test came up when the Meise Botanic Garden kindly agreed to host one as part of their Science Day. The bananas ? 'Gros Michel' and a Cavendish cultivar ('Williams') – were graciously provided by AgroFair, an importer and distributor of Fairtrade and organic tropical fruit. The bananas came from the same plantation in Costa Rica. They were harvested on the same day and shipped together to Belgium where they were ripened under the same conditions. The ProMusa coordinator, Inge Van den Bergh, and I guided the participants through the test, which required them to score (on a scale of 1 to 5) the taste, texture and colour of banana slices identified only by the letter C or D. We were assisted by a volunteer, Sonia Deneve, who prepared the banana samples, and Arne Mertens, who explained to visitors the botanic garden’s research on the banana. 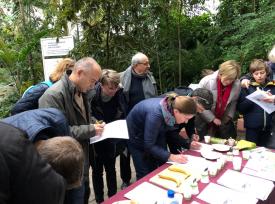 The participants did not know which cultivar was behind each letter, but they were told that one of them was the 'Gros Michel' of yesteryear, and the other was the type of banana sold at their local supermarket. The attitude of some of the participants changed after hearing this. They tried to guess which one was the 'Gros Michel', presumably to give it the score they thought it deserved. When we had the time, we would take participants aside to tell them which cultivar they had preferred. One of them was so surprised to find out that she had given the highest score to the Cavendish, that she asked to change her answer.

People rooting for 'Gros Michel' will be disappointed by the results: 46% of the 113 participants gave a higher score to the taste of Cavendish, compared to 38% who preferred 'Gros Michel'. The remaining 16% expressed no preference. Several participants told us they were surprised there was so little difference in taste.

This contrasts with the reaction of a small group of people at a blind taste test held two days before the botanic garden event. They didn't agree which of the two samples was the best, 7 people preferred 'Gros Michel' and 4 the Cavendish cultivar, but they all said that they tasted a difference. Two days after the botanic garden event, we organized another small blind taste test with the remaining bananas, which by then had entered stage 7 (see chart). This time, 7 people preferred the Cavendish and 4 'Gros Michel'. Most commented that the difference in taste between the samples was subtle. The deciding factor was often the texture.

I asked Christophe Bugaud, a food scientist at Cirad, the French agricultural research centre for international development, whether differences in taste between cultivars tend to be less pronounced the riper the bananas. He said he had not conducted standardized tests on the question. All the cultivars in the blind taste tests he oversees are at their respective optimum eating stage (the age, in days, at which the fruit should be harvested, and the number of days following the induction of ripening at which they should be eaten). But based on his observations he would say that differences in sensory qualities between cultivars tend to be more marked the riper the bananas.

Bugaud was, however, not surprised that a majority of the participants preferred the Cavendish. "People in Martinique say that they prefer 'Gros Michel', but when they are tested blind, it’s the Cavendish they prefer". In 2014, he was the principal investigator in a study that involved 96 people in Martinique and 118 in Montpellier. The participants were asked to score 12 cultivars, 4 of which were Cirad hybrids, on a scale of 1 to 9. The most liked cultivar, irrespective of location, was a Cavendish one ('Grande Naine') with an overall liking score of 6.9. 'Gros Michel' came in second place (with a mean score of 5.7), ex aequo with three cultivars ('Prata Ana', 'Fougamou' and 'Mossi') and two Cirad hybrids (925 and 918).

Martinique's fondness for the Cavendish shone through in the cluster analysis, which revealed four groups of consumers with contrasting preferences. Group 3 (25% of the participants) were the consumers who had praised the Cavendish, giving it an average score of 7.9. The group was mainly represented by people from Martinique.

Group 1 (18% of the participants) was the smallest cluster but the most open to different types of bananas. The people in this group gave all the cultivars, with the exception of 'Pisang Madu' a score between 6 and 8.

Being the top banana runs in the family

It should come as no surprise that Gros Michel' and Cavendish cultivars taste similar, given the similarities in their genetic background. Like the majority of banana cultivars, they are triploid, that is they have three copies of each gene-bearing chromosome. They inherited their respective triploid genome centuries, if not millennia ago, when two diploid (two copies, like humans) bananas mated and one of them passed on its entire, unreduced, genome (2n) instead of the usual half (n). By probing the genome of the cultivars, scientists found that both Gros Michel and Cavendish cultivars received the unreduced genome of a Mlali cultivar, which makes them at least half, or should I say two-third, siblings. The identity of the donor of the other set has not been settled. But given how genetically close Gros Michel and Cavendish cultivars are to each other, the n parents are probably closely related to each other.

These near siblings are also among the few types of bananas whose peel colour accurately advertises the ripeness of the fruit, a quality that helped their rise to the top. 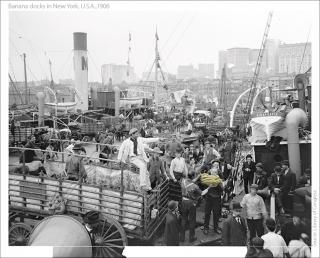 At the dawn of the export trade in the early 1880s, 'Gros Michel' was not the only type of banana shipped to the United States. In his book Banana Cultures, the historian John Soluri points out that although consumers liked the taste and aroma of 'Gros Michel', these qualities alone do not explain why it had eclipsed its rivals by the turn of the 20th century. Frequent references to other cultivars in cookbooks and magazines suggest that 'Gros Michel' was not necessarily the most appreciated. Another piece of evidence is that red bananas were sold at double the price of 'Gros Michel'. Soluri argues that “the interests and desires of shippers and fruit dealers played a major role in determining the Gros Michel’s prominence.”

Cavendish cultivars came into play in the 1950s when, after decades of trying to stay ahead of Fusarium wilt (aka Panama disease) by clearing forests to make up for the abandoned plantations of the susceptible 'Gros Michel', the industry gave up on its favourite cultivar. It replaced it with Cavendish cultivars, not only because they were resistant, but also because — in the words of a United Fruit executive — they could "fool most people" into believing they were eating a 'Gros Michel'.

It's normal to need blind taste tests to remind us of something that was already known. After all, that's why they exist: to help us see reality as it is, not as we wish it were.