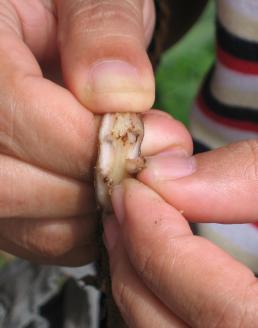 The integrated nematode management system is a set of cultural practices developed by CIRAD as an alternative to the use of carbamate and organophosphate nematicides in the production of export bananas in the French West Indies. It mainly consists in reducing nematode load by removing the bananas on which the nematodes feed and slowing down population build up when bananas are reintroduced.

Nematode control in large commercial banana plantations usually relies on the application of two to four nematicide treatments per year. These products, however, are increasingly condemned because of their toxicity. At the beginning of the 1990s, CIRAD scientists started developing a strategy to reduce their use in Martinique. The approach takes advantage of the fact that the main banana parasitic nematodes, such as Radopholus similis, do not develop a resting stage for long-term persistence in soils.

The first step consists in removing the banana plants and leaving the land fallow for a year or so in order to eliminate the plant-parasitic nematodes. An alternative is to plant a non-host crop.

When the approach was first applied on the island of Martinique, the number of nematodes quickly built up after only one production cycle. The unexpected result was attributed to the mechanical method used to destroy the banana plants (using a spading machine) which, by leaving behind viable bits of rhizome, provided a habitat for nematodes. Experiments led to the recommendation of injecting plants with glyphosate, a broad-spectrum systemic herbicide, and coming back to remove escapees and regenerated shoots1 .

Sanitized plots should be protected from run-off water coming from nematode-infested banana plots, which can carry nematodes. Digging 50-80 cm deep ditches around plots can delay re-infestation by three years or more.

Before reintroducing bananas, the soil should be tested for the presence of Radopholus similis. Potted biotests can be performed by a nematology laboratory. Soil samples collected from the plot are used as substrate for tissue-culture plantlets. After two months, the plants are uprooted and their root system examined2 .

To avoid reintroducing nematodes when bananas are replanted, farmers are advised to use pest- and disease-free tissue-culture plantlets.

Planting resistant varieties, either singly or in mixtures, is also an option, especially for smallholder farmers who cannot afford crop rotations or fallows. Experiments in Martinique have shown a reduction in the densities of nematodes following the introduction of the relatively resistant FB924 variety in a field of more susceptible Cavendish or plantain cultivars3 .

Planting a cover crop has also been shown to reduce nematode populations4 .

This integrated nematode management system has made it possible for farmers to grow bananas for 3 to 5 years without having to use nematicides. Fourteen years after it was first introduced, the combination of a fallow, or crop rotation, and tissue-culture plantlets has led to a 90% reduction in the quantity of nematicides being used.

A survey of 607 banana farmers indicated that in Guadeloupe 67% of farmers rotate bananas with another crop or a fallow period, and 59% use tissue-culture plantlets, compared to respectively 28% and 24% in Martinique5 .

Lack of land is an obstacle to the adoption of fallow or crop rotation. The high initial investment is also an issue. Simulations for a 4.2-hectare farm show a decline in revenues for the first two years and a half. After that transition period, however, revenues increase considerably compared to the pre-conversion level.

Battling an invisible enemy in the March 2012 issue of InfoMus@
Musapedia pages on pesticide-reducing practices: