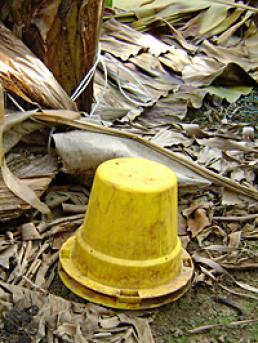 Pheromone trapping is a technology that uses pheromones (chemical substances that are secreted by members of the same species to trigger specific responses) to attract insects to a trap. In banana plantations, pheromone traps are used against the banana weevil (Cosmopolites sordidus). The trap is baited with a pheromone that is specific to the weevil and attracts both sexes.

Weevils are also trapped by laying down pieces of pseudostem on the ground, but the effectiveness of these traps is variable. Moreover, the weevils can walk out unless the traps are baited with insecticide. Nevertheless, since pseudostem traps do not require buying traps and lures, they are still widely used, even in large commercial plantations.

The main elements are the trap and the pheromone. 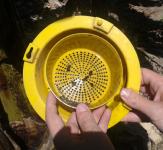 Container of a pitfall trap (photo by N. Fegeant, UGPBAN)

There are different kind of traps depending on the target insect. For weevils, a pitfall trap is generally used. It consists of a small yellow plastic box; to be visible from a distance. The container is buried in the ground. It can be empty or filled with soapy water. The cover closes the trap and holds the pheromone. A space between the two parts provides an entry for the weevils to fall in the trap. The opening is high enough for the weevils to pass through but limits the accumulation of residues.

The shape of the trap will be different if a biological control agent is added (see below) to allow the insect to escape after it has been contaminated.

The demonstration that the male weevil secretes a pheromone dates back to 19931 . Soon after, the main active ingredient (C11H20O2) was isolated and named sordidin2 . The chemically synthetised sordidin (marketed as Cosmolure) used in pheromone traps is often mixed with isoamyle acetate. The pheromone attracts adult weevils within a 10 to 20 meter perimeter.3 . Rain can interfere with the dispersal of the pheromone.

Pheromone traps have two main uses: monitoring population levels and controlling weevils by mass trapping. It is also recommended to trap the resisent weevils before planting a new plot.

Pheromone traps can be used to alert producers to the presence of the pest and to monitor the population before the infestation becomes serious. The recommended density is 4 traps per hectare4 . Since pheromones only attract moving adult weevils, and as many as 75% of the weevils in a plots live inside a plant, it is important to prevent populations from getting out of control.

Mass trapping is used to bring the weevils under control in heavily infested fields, in which case 16 traps per hectare placed 20 m apart are recommended. Computer simulations suggest that control is not improved when there are more than 16 traps per hectare4 . It is also recommended to regularly check the traps (twice a month) in order to collect the trapped insects. A three-year study in 12 commercial banana plantations located on the Cariibean island of Martinique showed that the largest number of weevils were captured between the 40th and 80th month after planting and during the dry season5 .

For a better control, trapping should be managed at the level of the plantation and take into account neighbouring plots (fallows or abandoned plots) that can be sources of weevils. To limit colonization from neighbouring plots, it is recommended to install a series of pheromone traps at the edge of the plot (1 trap every 20m).

Mass trapping within a fallow will improve weevil control and protect nearby fields from migrating adult weevils. In a study conducted in Guadeloupe, the number of weevil captures was highest 10 to 20 weeks into the fallow and decreased to zero after 9 months6 .

Scientists are experimenting with biocontrol agents such as entomopathogenic fungi (Beauveria bassiana and Metarhizium anisopliae) and nematodes (Steinernema carpocapsae and Steinernema feltiae) to increase the efficiency of the traps. The weevils would enter the trap to get contaminated and then leave to in turn contaminate other weevils4 . The technique is also being tested with thrips7 .