Masterclass on Fusarium wilt of banana

Masterclass on Fusarium wilt of banana 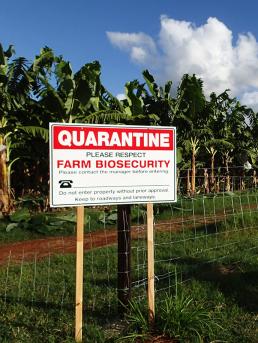 The masterclass brought together scientists who prepared presentations which provided background information for the online events that took place over three days in November 2020 and during which they answered questions. The presentations and recordings of the discussions have been uploaded to the masterclass' YouTube Channel.1

Wayne O'Neill presented the history and epidemiology of Fusarium wilt on banana, starting with the first published description of the disease based on observations made in 1874 by Joseph Bancroft at Eagle Farm near Brisbane, Australia.2

The first epidemic of Fusarium wilt started as the export trade to the Americas was taking off at the end of the 19 century.6 Clusters of diseased plants were observed as early as 1890 in Panama and Costa Rica, reaching alarming proportions in 1904.7 As the trade grew, so did losses to the wilt disease. Even though resistant cultivars were known,8 the industry, dominated by vertically integrated American multinational companies, kept ahead of the disease by clearing vast areas of land to plant bananas, a process that spread the disease when fields were planted with infested suckers.

The strategy prevented the collapse of the industry up to mid-1950s, when production costs soared in Central America as new land became remote and less accessible.9 Meanwhile, Ecuador had started to export Gros Michel bananas on a large scale.10 To compete with the cheaper exports from Ecuador, the infested soils of Central America were planted with Cavendish cultivars in 1960s.

The Foc strains that cause disease in banana were later classified into Races based on the cultivars they affected. The strains to which Gros Michel and other cultivars were susceptible were grouped into Race 1.

The rise of Race 4 strains

Some Race 1 strains were later found to cause Fusarium wilt in Cavendish cultivars in the subtropical growing areas of Australia, Canary Islands, South Africa and Taiwan.11 Originally classified as Race 4, they were later renamed subtropical race 4 (STR4) to distinguish them from strains that affected Cavendish cultivars in the tropics in the absence of predisposing environmental factors.

Tropical race 4 (TR4) came to prominence in the 1990s, when newly established plantations of Cavendish bananas in peninsular Malaysia and the Indonesian islands of Sumatra and Java were promptly destroyed by Fusarium wilt. The sudden outbreaks led Ivan Buddenhagen to develop a theory about the origin of TR4 and other Foc strains.12

According to his theory the strains that are pathogenic to domesticated bananas also exist as endophytes in the wild bananas they co-evolved with, as well as in the cultivars that were domesticated from these wild bananas. He calls these endophytes Fusarium oxysporum f. sp. musae (Fom). He thinks that domesticated bananas first became sick when they were taken outside their native habitat and transplanted in soils that contained Fom strains they had not evolved with. Wayne O'Neill and his co-presenter, Kenneth Pegg, agree that TR4 most likely evolved in the Malaysia and Indonesia area, while Race 1 strains probably originated in the India, Borneo and Vietnam area .

The spread of TR4 in Asia has met with little resistance. In the Mekong region, Chinese investors took on a role similar to the one of American multinationals in Central America.13 14

By the end of 2020, TR4 had been reported from 19 countries, including Mozambique in Africa15 , and Colombia in Latin America.16

Chlamydospores have a reputation for surviving indefinitely in soil, but it is more likely that their persistence, in the absence of susceptible banana plants, is the result of the fungus living as endophytes in alternative hosts.

Disease spread and influence of climatic and soil factors

The spread of the pathogen may be either active (from plant to plant) or passive (to new areas). The active spread of an existing infection depends on banana roots growing to the inoculum (roots of adjacent healthy banana plants growing into the root zone of diseased plants). In passive spread, the inoculum is carried to the roots by infected plant material; infested soil carried by footwear, vehicles, tools, planting material, animals or insects (like weevils); or contaminated water through flooding or irrigation.

Disease has been observed to be more severe in light textured soils compared to heavy soils. Some of the factors that have been associated with disease development include low pH, ammonium forms of nitrogen, low potassium and low calcium. Soils suppressive to Race 1 strains have been observed, but not to TR4.

A Fusarium wilt epidemic typically starts slowly during the lag phase, accelerates rapidly during the exponential phase, and levels off when there are few plants left for infection. Early detection and the implementation of strategies to contain the fungus is essential to keep the disease in the lag phase.

O'Neill presented two examples of epidemic spread. In Taiwan, where Giant Cavendish were grown for export to Japan, the first infested plant was observed in 1967. By 1976 there were half a million infected plants over 1,200 hectares. In Mozambique, the disease rapidly transitioned to the exponential growth phase. It went from a handful of symptomatic plants on most farms towards the end of 2013 to more than 1 million infected plants across the six farms in mid-2016.

How to recognize the symptoms of Fusarium wilt in the field

Mauricio Guzman presented the typical and atypical symptoms of Fusarium wilt and how they can distinguished from diseases with similar symptoms, such as Moko in Latin America, and BXW in Eastern Africa. The latter example was provided by Guy Blomme during the online discussion on the topic.

In his presentation, Wayne O'Neill discussed two confounding factors that can obscure the presence of TR4 in a new area and delay the implementation of containment measures. The first one is mixed infections, typically with bacterial rots. He gave the example of the TR4 incursion in Queensland, Australia. The first plants that were found to be infected with TR4 were initially believed to be cases of bacterial rhizome rot. The second factor is complacency towards symptomatic cultivars that are susceptible to Race 1 or 2 strains.17

How to identify pathogenic strains

Altus Viljoen presented the methods used to identify pathogenic strains and their classification into Races based on their pathogenicity to specific cultivars, and into vegetative compability groups (VCGs).18

Clip on the identification and classification of the pathogenic strains that cause Fusarium wilt in banana. The excerpts are from Altus Viljoen's presentationand the masterclass discussions held on the 24 and 25 of November 2020.
Clip on the field detection of pathogenic strains and the challenge posed by asymptomatic plants. The excerpts are from the presentation by Diane Mostert and Megan Matthewsand the masterclass discussions held on 24 and 25  of November 2020.
Clip on the challenges of detecting pathogenic strains in water, soil and plants. The excerpts are from Megan Matthews' presentationand the masterclass discussion held on the topic.

How to manage incursions of TR4

Clip on the urea treatment developed by Australia's Biosecurity Queensland to destroy banana plants infested with TR4 and its applicability to small areas. The excerpts are from Wayne O'Neill's presentationand the masterclass discussion held on the topic.
Clip on the role of non-banana plants in managing Fusarium wilt. The excerpt is from Tony Pattison's presentation.