Loading...
Under the peel » The trap of extinction stories on bananas

When Going bananas—the magazine article that stamped a 10-year expiry date on the banana—made the cover of New Scientist in 2003, the reaction was unprecedented. Media from all over the world picked up the story that tropical race 4 (TR4), the fungal strain that causes Fusarium wilt (aka Panama disease) in Cavendish cultivars, was driving the banana to the edge of extinction.

The 10-year deadline was criticized for being alarmist, but it did turn out to be prescient in so far as 2013 coincided with the first report of TR4 in Jordan and Mozambique. TR4 was no longer a problem found only in Asia. It could leap over continents. But even though the fungus had landed on a continent that produces more than a quarter of the world’s bananas ? and where cooking bananas are an important staple crop ? for western media, the main news of this second wave of extinction stories has been that TR4 had gotten closer to the Latin American plantations supplying the North American and European markets. The anxiety is palpable in the frequent use of mashed up words conjuring up visions of a world without bananas ? bananapocalypse, bananageddon and bananatastrophe. Maybe the New Scientist story was not so alarmist after all.

Rereading it, I was struck by one major difference with the current batch of extinction stories. Unlike the latter, the New Scientist piece doesn’t single out monocultures as the reason why bananas are vulnerable to pests and diseases. Instead, it correctly points out that it is because the crop lacks the genetic diversity that would help it fend off pests and diseases. Monocultures didn’t make bananas vulnerable. Bananas are already vulnerable. Monocultures mainly make the pathogen’s job easier.

To understand why the underlying genetic diversity of the crop is limiting its capacity to adapt to changing circumstances, you have to go back to its domestication, which has led to the loss of sexual reproduction (see The domestication of the banana).

Vegetative reproduction doesn’t mean that genetic diversity is no longer generated. It just means that diversity is generated at the much slower pace of mutations. Cultivars are created when farmers select and propagate ‘mutant’ plants exhibiting new and attractive traits.

Cultivars that are related to each other through a series of mutations are classified into groups (which are confusingly called subgroups). Because the genetic diversity within a group is negligible, the cultivars tend to have the same reactions to pests and diseases1 . Cavendish is such a group2 , which is why the various Cavendish cultivars tend to share the same susceptibility to TR43 .

It also means that it’s not true, as media pundits like to say, that if the Cavendish banana can no longer be grown because of TR4, there are 999 cultivars to choose from. For one, dozens of these 999 cultivars are also Cavendish cultivars. There are also large groups (such as the Plantains and the East African highland bananas) that have upwards of 100 cultivars. In the end, the greatest differences are not between the 1,000 or so banana cultivars, but between a much smaller number of groups. The problem with only paying attention to the number of cultivars is that it creates a false sense of security. Add the fact that TR4 can infect more groups of banana than any of the other strains of the fungus, and it indeed doesn’t indeed look good, not just for the export banana.

Paradoxically, framing the threat posed by TR4 in terms of extinction minimizes its consequences because it invites the obvious response that the ‘Gros Michel’ banana—which used to dominate the export trade until different strains of the same disease led to its replacement by Cavendish cultivars—is not extinct. It is still grown in places like Costa Rica (under the name ‘Criollo’) and Uganda (where it is known as ‘Bogoya’). Most of time it is grown in soils that are still free of the strains to which ‘Gros Michel’ is susceptible. But it can also be grown in infested soils, either because the losses are manageable or, in rare cases that are not well understood, because there is something in the soil that suppresses the pathogen.

Another problem with focusing on the extinction of the export bananas is that it ignores the impact the spread of Fusarium wilt has on the ability of smallholder farmers who are not participating in the export trade to grow a diversity of cultivars.

The rise of the Cavendish

One of the misconceptions about Cavendish bananas is that they are only grown for the export trade, which represents about 15% of global production. The assumption is that the remaining 85% consists of non-Cavendish bananas grown by smallholders. It’s not entirely true. 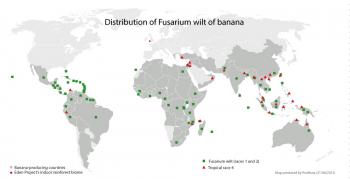 According to the 2012 production stats4 published in FruiTrop, Cavendish cultivars account for more than 46% of the bananas grown in the world, which means that about 31% of the bananas grown for local and regional markets are Cavendish cultivars. India alone produces more Cavendish bananas for its domestic market (10 m tonnes) than all the countries of Central America put together (7.4 m tonnes). Their productivity is one factor. Another is the large quantity of agronomic and post-harvest work done on the crop since the 1950s. But it’s also because Fusarium wilt has spread to most banana-producing countries (see map), making it difficult to grow cultivars that are susceptible to the various strains of the fungus collectively called races 1 and 2. In many cases, the easiest option has been to grow Cavendish cultivars.

The double-edged sword of resistant cultivars

The problem with presenting resistant cultivars as the only solution to Fusarium wilt is that it sends the message that biosecurity measures can be dispensed with in the places where they are most needed, infested plantations. Resistant cultivars are only a solution to the problem of growing bananas in infested soils. They do not prevent the fungal spores present in the soil from being moved around and contaminating other farms. The only way to stem this flow is to put in place quarantine and biosecurity measures.

Quarantine efforts have come under criticism for not stopping the spread of TR4. But the problem is not a lack of effectiveness, as much as a lack of implementation. As Australia is showing, it is possible to contain TR4 when it is caught early and prompt action is taken.

Containment (keeping the pathogen in) and exclusion (keeping the pathogen out) are two sides of the same coin. Except for the actions specific to isolating an infested area, the biosecurity measures aimed at preventing the fungus from escaping an infested farm are essentially the same as the ones growers can take to protect their farm5 . But whereas exclusion is the responsibility of the producer, containment can be legislated. In Australia, the existence of a legal framework is what allowed Biosecurity Queensland to intervene when TR4 was confirmed in a Tully farm in March of this year.

Matching Australia’s standards will be difficult for many countries. Resources are an issue, but so is the political will to enact stricter regulations, and more importantly to enforce them. On the other hand, basic and simple measures such as not sharing farm equipment and planting a ground cover6 don’t need to be legislated. Exclusion is just good practice.

This is not to say that resistant cultivars, farmer selected, bred or genetically modified7 , don’t have a role to play. But since no cultivar is resistant to everything, an integrated approach that puts an emphasis on biosecurity8 is more sensible. It’s also more diversity-friendly. For example, it leaves open the option of growing susceptible cultivars in TR4-free soils.

Cavendish bananas have been getting a bad rap in extinction stories. The danger in looking forward to their demise is believing, like the uncle of this blogger, that “the spread of TR4 will introduce different varietals to the American public”. People who are rooting for TR4 need to be careful what they wish for.

1 For traits like resistance to pests and diseases scientists often look at wild banana species, which have a greater reservoir of genetic diversity.
2 Cavendish is the name of a group, not a cultivar. The best known Cavendish cultivars are ‘Grande Naine’, ‘Williams’, ‘Dwarf Cavendish’ and ‘Valery’.
3 One exception are the Giant Cavendish tissue-culture variants (GCTCV) from the Taiwan Banana Research Institute.
4 Lescot, T. 2014. Banana genetic diversity: Estimated world production by type of banana FruiTrop, 221:98-102
5 See for example the standards and guidelines produced by Biosecurity Queensland.
6 With regards to TR4, a ground cover would decrease the risk of spreading the fungus by reducing soil erosion and surface water flow. It can also help by creating a favourable environment for microorganisms that compete with the pathogen.
7 Breeding is possible because many cultivars have residual fertility, but it’s not the only way to improve bananas.
8 My appeal for an integrated approach to the management of Fusarium wilt is inspired by the writings of Australian scientist Jeff Daniells on the topic.

The hidden side of banana diversity
Blogs on TR4:
More stories…