Loading...
News and analysis » Agroecology and the banana: from theory to practice 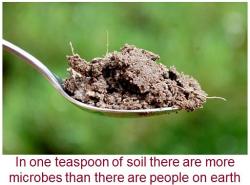 Modern agriculture largely relies on technological ingenuity to get crops to outperform nature. Agroecology, on the other hand, looks to nature’s self-regulating capacity for inspiration. When several of its practitioners came together at the ProMusa symposium on agroecological approaches hosted by the French agricultural research centre for development CIRAD, the natural ecosystem most extolled by keynote speakers was soil—the “poor man’s tropical forest”—and its “trillions of potential partners, the microbes”. Except that co-opting microbial communities to deliver ecosystem services such as improving soil fertility and suppressing disease will likewise require feats of ingenuity.

Until recently, the only microorganisms that could be put to work in agricultural systems, usually as biocontrol agents, belonged to the small minority of microbes that can be cultured in the lab. The advent of high-throughput sequencing technologies has helped throw light on the microbial diversity that is invisible to traditional analytical tools, but knowing which genes are present is not sufficient to develop innovative biological control methods argued Sebastien Massart from the University of Gembloux in Belgium. Scientists also need to understand what the genes do.

Having a better idea of how the microbial pieces fit together should also help develop indicators of soil health. Agronomists have tools to determine whether a soil’s physical and chemical characteristics match the needs of a crop, but lack similarly established methods for diagnosing whether the biological health of a soil has been compromised by agricultural practices. As Toni Pattison of the Queensland Government’s Department of Agriculture and Fisheries remarked during his talk on soil indicators, “soil biology is good at fluctuating but it does not mean that something has changed”.

To test the discriminant power of soil health indicators based on proxy measures of the structure and activity of microbial communities, Pattison and his colleagues compared soil samples from conventionally-managed banana farms and Ecoganic-certified ones. The management systems could be distinguished with a minimum of ten soil parameters, but not without some overlap as the analytical tool could not tell the difference 22% of the time. A similar effort by Pattison’s colleague Anna McBeath to link management practices to disease suppressiveness underscores how much of what goes on underground remains a mystery. Like Massart, she is pinning her hopes on metagenomics to help identify the microbial communities involved in disease suppression.

How a better understanding of the soil food web will lead to new ways of controlling diseases is still unclear. More advanced with regards to practical applications is the body of work on cover crops presented during the symposium, starting with the keynote address by CIRAD scientist Philippe Tixier. 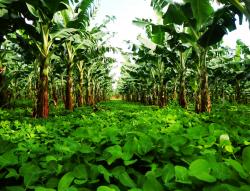 Bananas grown with a cover crop of Arachis pintoi in Guadeloupe. (Photo, CIRAD)

Tixier reviewed the research he and his colleagues have been doing on the ecological regulation of the banana weevil (Cosmopolites sordidus), whose larvae weaken banana plants by boring galleries in their rhizome. The conventional way of controlling the insect pest is by applying insecticides, except that the relief is usually temporary as the weevil numbers tend to bounce back to pre-insecticide levels. The agroecological alternative Tixier advocates is a two-pronged approach based on the use of pheromone traps, to reduce the dispersal of adult weevils, and the planting of a cover crop to increase predation on the weevil’s eggs and larvae.

In commercial plantations, bananas are usually grown on bare soil because other plants would compete with the banana plant for light, water and nutrients. Except that this set up favours the soil-dwelling pests and pathogens that target bananas, especially when bananas are grown as a single crop year after year on the same land, the standard practice in commercial plantations.

The rationale for introducing a cover crop is that it will increase the abundance of herbivorous species feeding on the new resource, and in due course of their predators. A more complex food web should translate into more predators preying on the weevil. Tixier showed data from a study conducted in Martinique in which predation on weevils eggs was 2 to 7 times higher in the presence of a cover crop compared to bare soil.

But different cover crops have different effects on the food web. One unwanted effect is when predators prey on each other, a phenomenon known as intraguild predation. The presentation by CIRAD scientist Dominique Carval had an example of intraguild predation by the ant species Pheidole jelskii. Nevertheless, the abundance of weevils was still 30% lower in the plots with a Paspalum notatum cover crop than in the bare soil ones.

Pest regulation is just one of the ecosystem services a cover crop can provide. CIRAD scientist Raphael Achard presented the results of an experiment on weed control in which two types of cover crops, Neonotonia wightii and Centrosema pascuorum, were compared to a spontaneous weed cover and chemical weed control. While the addition of the cover crop did not have a negative effect on the average bunch weight at harvest, the banana plants in the plots with a cover crop took longer to flower due to competition with the cover crop for soil nitrogen. 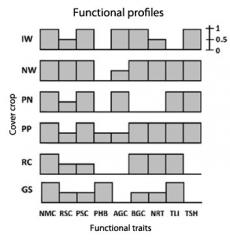 The height of each bar indicates the level of achievement of the assessed functional traits. (Source, CIRAD)

Given the large number of plant species to choose from, knowing their strengths and weaknesses would remove much of the guesswork out of deciding which cover crop to introduce in a field of bananas. The functional profiles in Gaëlle Damour’s talk are a step in that direction.

To build the functional profiles of 28 tropical cover crops (see diagram for examples), the CIRAD scientist scored a series of traits associated with the provision of specific ecosystem services (nematode control, weed control and soil fertility) and the avoidance of dis-services (competition with the banana plants). The functional profiles can then be used to select the cover crops that would be best suited to a given situation.

For example, a good cover crop to introduce on fallow land should score high on up to six traits: not being a host of the nematode pest Radopholus similis (NMC), its colonization ability and persistence (RSC and PSC), its capacity to provide a physical barrier to germination if it is turned into mulch (PHB), its capacity to return nitrogen to the banana plant (NRT) and its tolerance to light (TLI). But since most profiles tend to fall short of the ideal, Damour recommends mixing species that have complementary traits. 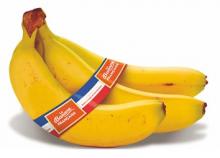 Most of the research on cover crops mentioned during the symposium is to help commercial banana growers make the agroecological transition. Except that the market does not reward producers who go down that road. As Sebastien Zanoletti of UGPBAN (the banana grower association of the French West Indies) pointed out in his keynote address, the implementation of agroecological practices to reduce the use of pesticides and herbicides in Martinique and Guadeloupe increased production costs by about 30%. They tried using environmental and social arguments to justify the higher price of their bananas, but it didn’t work. Their new strategy is appealing to the chauvinism of French consumers by wrapping their bananas in the colours of the French flag.

In Australia, the banana industry has also been under pressure to adopt better management practices over concerns that agricultural pollutants were harming the Great Barrier Reef. While it did initiate changes, Principal horticulturist Jeff Daniells believes that the presence of TR4 in Queensland could turn out be an even more powerful driver of agroecological approaches. In the long run, however, being able to demonstrate the benefits of implementing agroecological practices will be determinant in getting farmers to adopt them, maintained his colleague Pattison who pointed to the financial impact of delayed bunch emergence when bananas are grown with cover crops (see also the presentation by CIRAD scientist Hoa Tran Quoc on determinants of adoption of cover crops in the French Caribbean).

At the other end of the spectrum, smallholder farmers who do not use pesticides and fertilizers are unlikely to be motivated to plant cover crops for ecosystem services. But they can still benefit from agroecological approaches, argued CIRAD scientist Sylvain Depigny in a Socratic dialogue on the future of Plantain-based cropping systems. Responding to his colleague Thierry Lescot, Depigny contended that research on these diversified production systems can help increase the yields of Plantains without sacrificing diversity, the path taken by many producers in Latin America and the Caribbean. Bioversity International scientist Guy Blomme proposed a similar strategy in his presentation on the integration of shade- and drought-tolerant food and fodder crops for year-round productivity in African rain-fed banana-based systems.

In the meantime, Tixier is already looking beyond simply increasing plant diversity to also taking into account spatial patterns. Drawing on a study in which an increase in productivity was measured when termite mounds were evenly spaced, compared to randomly distributed ones, he imagines banana fields dotted with small islands of biodiversity. His vision for the future reconciles the two competing views of agreocology articulated by Paolo Barberi of the Sant’Anna School of Advanced Studies in his keynote address; the one in which biodiversity is at the service of agriculture to deliver production-related ecosystem services — such as weed and pest control, and soil fertility — and the one in which agriculture is at the service of biodiversity to deliver non-production-related ecosystem services — such as pollination, and species and habitat conservation.

Blogs based on symposium presentations