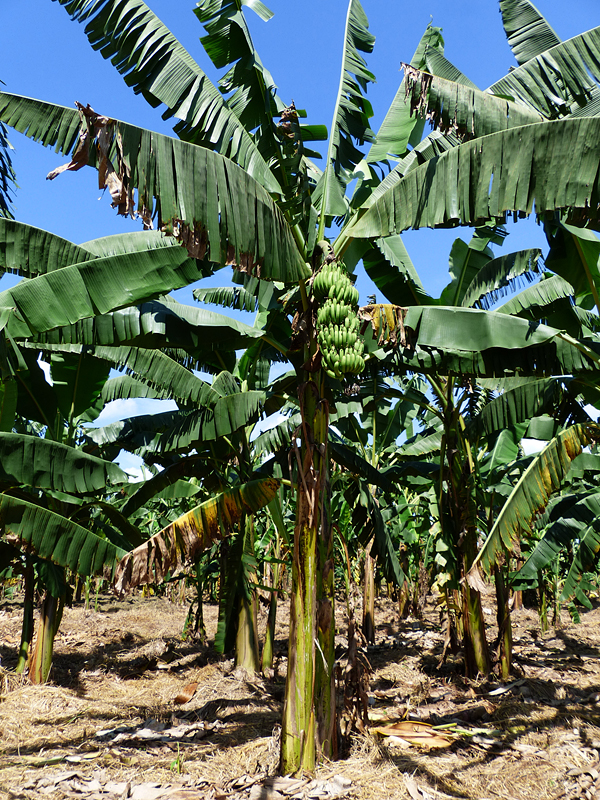 NARITA hybrids are high-yielding and disease-resistant hybrids that are related to a group of cooking and juice bananas called East African highland bananas (EAHB). They are the result of over 20 years of joint breeding efforts between the institutes after which they are named: the National Agricultural Research Organization (NARO) of Uganda and the International Institute of Tropical Agriculture (IITA)1 . IITA initiated the collaboration with NARO in the 1990s using some of the banana hybrids it had developed at its Onne field station in Nigeria2 . The NARITAs were developed in Uganda, at the National Agricultural Research Laboratories Kawanda and the IITA Sendusu research station. 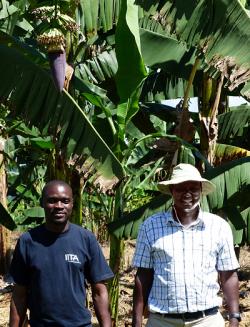 The NARITAs are secondary triploid (3x) hybrids3 . They were generally obtained by crossing a female fertile EAHB cultivar (3x)4 with a diploid (2x) source of resistance, more often than not Calcutta 4, a genebank accession of the wild species Musa acuminata ssp. burmannica which provided resistance to black leaf streak. The selected tetraploid (4x) hybrids resulting from that cross were then crossed with improved diploids (2x) to produce secondary triploids from which individual NARITA hybrids were selected.

The genebank accessions used in the crosses came from the NARO field collection in Kawanda and the IITA field collection in Sendusu, Uganda. Some of the improved diploids are the products of previous breeding efforts by IITA at its Onne field station in Nigeria (the 7197-2, 8075-7, 9128-3 and 9719-7 hybrids, which used to be preceded by TMBx, for tropical Musa bananas5 ) and by FHIA (the Honduran Agricultural Research Foundation) at its La Lima field station in Honduras (the SH2095, SH2766, SH3142, SH3217 and SH3362 hybrids, with SH standing for selected hybrids6 ).

Some of the NARITA hybrids have been released under different names or have been given a local name by farmers.

Of the 27 NARITA hybrids, 25 have been evaluated over three crop cycles at the IITA Sendusu research station in Uganda8 . Their agronomic performance was compared to the one of the local check, the EAHB cultivar Mbwazirume. Their potential for adoption by farmers and consumers is being evaluated in a broader range of environments in Tanzania and Uganda as part of a project co-funded by the Bill and Melinda Gates Foundation, the CGIAR Research program on Roots, Tubers and Bananas, IITA and Bioversity International9 10 .

To evaluate the hybrids, the project incorporates two participatory varietal selection approaches: mother-baby evaluation trials and 'stand alone' baby trials to promote adoption beyond the populations participating in the mother-baby trials. In the first instance, the hybrids are evaluated in researcher-managed trials (mother trials) that farmers visit several times during the growing cycle and after harvest. Farmers then select 3 to 5 hybrids to test in their fields (baby trials) where they can compare the performance of the hybrids to the one of their local cultivars.

In the ‘stand-alone’ baby trials to be set up in Uganda, each farmer receives a randomly assigned combination of three hybrids to rank. This approach, which relies on social networks to spread the information on the performance of the hybrids, allows more villages to be involved, with fewer farmers per village.

Special edition of InfoMus@: A virtual tour of NARITA hybrids

Website of the Breeding Better Bananas project.
To browse accession-level information on 'NARITA hybrids' in MGIS