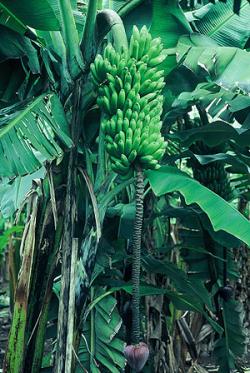 'FHIA-01' is a synthetic hybrid dessert banana that was released by FHIA in 1988.  It was developed from a Dwarf Pome and another synthetic hybrid.  'FHIA-01' plants are cold- and wind-tolerant and produce higher quality fruits in sub-tropical, than tropical, conditions.  'FHIA-01' is tolerant/resistant to Fusarium wilt and black leaf streak (black Sigatoka) and susceptible to Sigatoka leaf spot (yellow Sigatoka) and nematodes.  'FHIA-01' has been widely distributed for subsistence and commercial cultivation.  In Australia, 'FHIA-01' has been marketed under the name 'Goldfinger'.

'FHIA-01' was released by FHIA in 1988 as part of their programme to breed bananas with increased tolerance/resistance to major pests and diseases 2 3 .  The female parent was a ‘Dwarf Brazilian/Dwarf Apple’ type (AAB, Pome subgroup) and the male parent was 'SH-3142', an advanced cultivar (genome group AA) also produced by FHIA4 5 .  'FHIA-01' was one of the first synthetic hybrids to be widely distributed to more than 50 tropical and sub-tropical countries for subsistence and commercial cultivation after it demonstrated tolerance to Fusarium wilt and high agronomic performance during the International Musa Testing Programme phase 16 7 8 .  'FHIA-01' was released for commercial cultivation in Australia in 1995 under the name of 'Goldfinger'9 .

'FHIA-01' plants grow to around 2.5 m tall and the pseudostem is shiny and green to light-green with many dark brown blotches10 .  The leaves are slightly drooping2 9 and unblemished5 .  The leaves remain quite green during the winter in southern Queensland, Australia, and this is a characteristic of some cultivars that are tolerant to Fusarium wilt9 .  The bunch hangs at a slight angle and is asymmetric{10 .  The rachis is bare5 .  The male bud is short and heart-shaped with distinctive wide shoulders and revolute (rolling) bracts that lift one at a time10 9 . 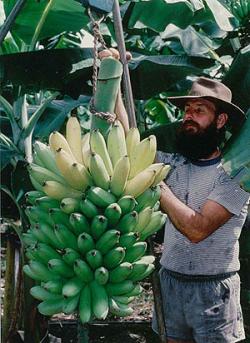 FHIA-01 bunch being weighed in Australia. (Photo by J. Daniells)

'FHIA-01' plants are cold-tolerant and produce better quality fruit in sub-tropical than tropical conditions6 11 .  Because of their small stature they are considered to be wind-tolerant5 .  The finger length is considered to be extra large by Cavendish standards9 .

Days from harvesting motherplant to flowering of the ratoon: 15614

Days from flowering to harvest: 13315

Days from harvesting motherplant to harvest of the ratoon: 26514

Number of fruits on hand:

'FHIA-01' has been classified as resistant to Mycosphaerella fijiensis14 23 . However, breakdown of resistance was observed in Samoa in 200624 .

'FHIA-01' has been classified as both resistant16 and susceptible6 to Mycosphaerella musicola.  During field evaluation trials in Australia for Fusarium wilt, though in field unsprayed for leaf diseases, 'FHIA-01' developed very few symptoms of 'yellow Sigatoka' leaf spot25 .

'FHIA-01' has been classified as susceptible to Mycosphaerella eumusae but this can be controlled by regular de-leafing9 .

'FHIA-01' does not seem to have been evaluated for its tolerance to weevils.

'FHIA-01' has been classified as highly susceptible to Banana bunchy top virus9 .

'FHIA-01' has been classified as moderately susceptible to Pratylenchus spp. (4,848 nematodes per 100 g root) when tissue-culture plantlets were grown in pots28 .

'FHIA-01' has been classified as susceptible to Meloidogyne spp. (41,352 nematodes per 100 g root) when tissue-culture plantlets were grown in pots28 .

'FHIA-01' has been classified as susceptible to Helicotylenchus multicinctus (1,577 nematodes per 100 g root) when tissue-culture plantlets were grown in pots28 .

'FHIA-01' does not seem to have been evaluated for its tolerance to weevils.

'FHIA-01' does not seem to have been evaluated for its tolerance to drought or other abiotic stresses.

FHIA recommends that 'FHIA-01' be cultivated under the following conditions2 :

Pesticide inputs: because 'FHIA-01' is tolerant/resistant to many of the pests and diseases that affect bananas (see ‘reaction to diseases and pests’ section) it can be grown without the application of pesticides.

'FHIA-01' hands mature sequentially and can be harvested one at a time2 .  To avoid the fruits arriving to consumers in an over-ripe, soft condition the hands or the whole bunch should be harvested when they are in a hard green condition29 .  The fruits have a green life of approximately 27 days when kept at 20°C.  Fruits ripened at 16°C with 96 % relative humidity and 1 ppm ethylene (trickle) had good appearance and colour.  The shelf life of ripe fruits is approximately 8 days when kept at 20°C.  The fruits only obtain a high sugar content once the peel is a bright yellow colour29 .

'FHIA-01' is a dessert banana that is mostly eaten raw when ripe.  The ripe fruit has a sweet-acid, apple flavour that is similar to the mother plant2 5 . The cut fruit does not turn black upon exposure to the air and so is good to use in salads2 .