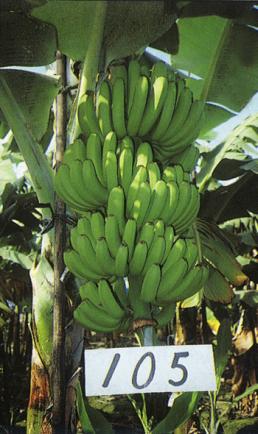 'GCTCV-105' is a 'Giant Cavendish' tissue-culture variant selected by TBRI for its resistance to Fusarium wilt tropical race 4 (TR4), which causes disease in Cavendish cultivars. It was obtained by testing in infested fields tissue-culture plantlets produced from rhizomes of 'Pei Chiao' obtained from different locations in Taiwan1 .

'GCTCV-105' is about 2.6 m tall and has a pseudostem girth of about 70 cm , making it slightly shorter and more slender than 'Pei Chiao', the 'Giant Cavendish' clone from which it is derived2 . Its growth cycle is around 11.5-12.5 months. It produces a uniform, compact bunch of about 24 kg, with a larger number of slightly shorter and less curved fingers than Pei Chiao.

The starchy fruits have excellent flavour, a sugar content of 20-24°Brix and a shelf life of 3-4 days.

'GCTCV-105' is less susceptible to Fusarium oxysporum f. sp. cubense race 4 than the local 'Giant Cavendish' clone 'Pei Chiao'1 . Disease incidence of 1.6% and 1.9% was recorded for 'GCTCV-105' in two field trials, compared to 69% and 42.6% for 'Pei Chiao'. Like all Cavendish bananas, 'GCTCV-105' is resistant to F. oxysporum f. sp. cubense race 1 and susceptible to Mycosphaerella fijiensis and BBTV. It is tolerant to banana flower thrips.