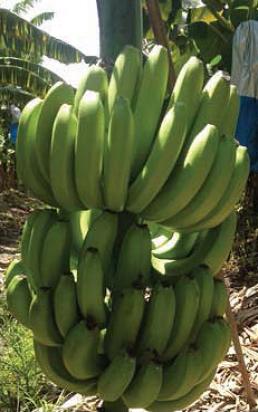 'GCTCV-119' is a 'Giant Cavendish' tissue-culture variant selected by TBRI for its resistance to Fusarium wilt tropical race 4 (TR4), which causes disease in Cavendish cultivars. The selection was obtained by testing in infested fields tissue-culture plantlets produced from rhizomes of 'Pei Chiao'.  Its agronomic performance is generally inferior to the one of the Cavendish cultivar 'Grande Naine', but can be improved through recurrent selection using tissue-culture plantlets. Further selection for resistance in TR4-infested fields produced the variant 'GCTCV-219'.

'GCTCV-119' has a number of drawbacks in that it has a very tall pseudostem, a short fruit stalk, a long crop cycle, and few hands1 . In an evaluation trial conducted in the Philippines, its agronomic traits and yield were inferior to those of the Cavendish cultivar 'Grande Naine'2 . It took longer to mature (233 days compared to 162 days on average) and had a lower bunch weight that resulted in a lower yield per crop cycle and per year. Although 'GCTCV-119' had more fingers per hand, these were shorter and thinner. As a result, fewer fruits met market standards. A greater hand curvature also resulted in more rejects when packed. On the other hand, the fruits of 'GCTCV-119' were sweeter than those of 'Grande Naine'. They had significantly higher starch levels (which convert into sugars during ripening), more titratable solids and fewer acids.

In an evaluation trial in northern Queensland, Australia, the longer cropping cycle of 'GCTCV-119' was not compensated for by a heavier bunch. The bunch weight ranged from 17.3 kg to 19.5 kg3 .

'GCTCV-119' has shown resistance to the tropical race 4 fungal strains that cause Fusarium wilt in Cavendish cultivars in field trials conducted in China5 and the Philippines2 . It is resistant to race 1 strains.