Papua New Guinea at a glance 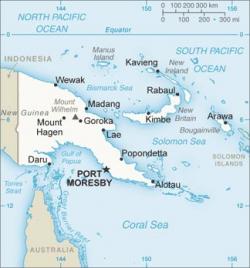 The banana skipper has been present in PNG 1983. It entered the country from the Indonesian province of Papua. The pest is common and especially abundant during the dry season. The larvae eat the banana leaves and cause them to form rolls. A 1988-1991 collaborative project by the Australian Centre for International Agricultural Research and the PNG Department of Agriculture and Livestock led to the introduction of three biological agents. The most successful one was a parasitic wasp, Cotesia erionotae, although its long term impact has not been investigated. In 2013, the banana skipper was reported in Abau district in the Central province5 .

Search for photos related to this country in the Musarama image bank
Other banana-producing countries: