Single diseased stem removal (SDSR) is an alternative to uprooting the entire mat (the rhizome and its attached stems) to control Xanthomonas wilt (better known as BXW). It consists in cutting at soil level any stem showing symptoms of BXW. It is made possible by the atypical behaviour of the bacteria that causes the disease1 .

The SDSR technique is based on studies which showed that infected mats can recover under the combined effects of incomplete systemicity and latent infections. Unlike other pathogens that infect banana plants, this particular bacteria does not systematically infect all the stems on a mat (incomplete systemicity) and the density of bacteria inside a stem might be too low to cause symptoms (latent infection). It is possible that one of stems  will develop the disease in the future. Applying SDSR on every stem showing symptoms of the disease and preventing new infections should eventually reduce losses to negligeable levels.

One of the advantages of the SDSR technique over mat removal is that farmers don't need to replant. To control the disease, the SDSR technique needs to be applied in combination with the cultural practices that prevent infections, namely debudding and disinfecting farm tools. However, the technique should not be used to control other lethal diseases1 .

In the early days of the Xanthomonas wilt epidemic, the only recommended course of action in the presence of a diseased plant was to uproot the entire mat before replanting with clean planting material. But the practice is not only laborious (one person can remove two mats at most in a day2 ), farmers are reluctant to remove an entire mat when only one of the plants is showing disease symptoms3 . Sourcing clean planting material, especially tissue-culture plantlets, is also often a problem. As a result, the practice was not widely adopted. Surveys conducted in the late 2000s confirmed that, to the extent farmers were applying control measures, they were more likely to cut off the diseased stem than dig up the mat4 5 6 .

The first studies on the systemicity of the bacteria concluded that cutting at soil level flower-infected plants, when the symptoms were limited to the male bud, would minimize the chances of the bacteria entering the rhizome if it was done on Kayinja plants7 (it was not recommended for East African Highland Banana cultivars8 ). The prevailing assumption at the time was that the bacteria colonized all parts of the mat, including the attached suckers, hence the need to uproot the mat. Subsequent multi-year studies showed that the bacteria do not systematically infect all the suckers on a mat and that it's not necessary to remove the mat to control the disease. Over time, mats will recover from the disease under the combined effects of incomplete systemicity and latent infections, as long as fresh infections are prevented9 . The results provided justification for testing the removal of the diseased stem in farmers' fields.

The single diseased stem removal technique (SDSR) consists in cutting at soil level the visibly diseased stems in a field and then regularly check for any new diseased ones. After cutting the stem at soil level, the apical meristem is destroyed to prevent the diseased stem from growing back. The exposed base is then covered with soil to reduce contact with the bacteria-laden ooze secreted by infected plants (see photos).

Cutting leaves can be replaced by leaf bending (see section on Intercropping with annual crops below) to prevent disease transmission through contaminated tools. Farmers are also advised to remove weeds by hand instead of using a hoe. 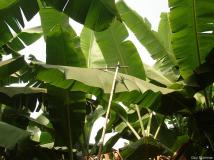 Since the cutting tools used to remove the diseased stems will be contaminated from entering in contact with bacteria-laden ooze, farmers need to disinfect their tools before using them on healthy looking stems. To faciliate the adoption of the measure, all the visibly diseased stems can be cut with the same knife, which would then only need to be disinfected once before being used on healthy looking plants.

The felled stems can be left to rot on the spot, or heaped at the edge of the field if other crops are planted among the bananas. Farmers are advised not to chop the stems into small pieces as this would release bacteria-rich inoculum, which could then be dissiminated through run-off water and by animals10 .

To prevent infections by insects visiting the male bud, farmers are advised to remove the male bud after the last hands have formed by using a forked wooden stick.

Intercropping with annual crops, such as beans and sweetpotatos, can interfere with the efficiency of SDSR, as when banana leaves are cut to reduce shade. Instead of removing the leaves with cutting tools that could transmit the bacteria, the leaf can be pulled down by hand until the petiole breaks. If the plant is tall, the leaves can be pulled down by using a hooked wooden stick (see photo on leaf bending). The bent leaves can serve as a support for climbing beans and continue contributing to photosynthesis, albeit in a diminished capacity.

Before the sowing of an intercrop, farmers are advised not to pile cut diseased stems and leaves near healthy mats.

Bioversity International has produced extension material to promote the SDSR technique to farmers, namely a poster, which is available for download from the Musarama image bank, and an expanded 2-page factsheet (PDF 2MB).

Incomplete systemicity: a helping hand in the fight against Xanthomonas wilt, published 23 February 2018 in InfoMus@'s Under the peel, the blog of the ProMusa community