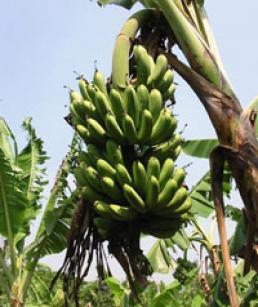 'Lakatan' is a popular dessert banana in the Philippines. It was first described as Musa paradisiaca Lacatan in the 19th century by Francesco Manuel Blanco in his Flora de Filipinas. The Spanish botanist was using the  binomial nomenclature system developed by Carl Linneaus to name species. In the nomenclature system specific to cultivated bananas that superseded it, the cultivar has been alternately presented as a diploid (AA genome group)1 , a classification supported by chromosome counts using meristem tissue from the male bud2 , or as a triploid (AAA genome group)3 . A molecular and cytological analysis of the Lakatan accessions at the ITC places the cultivar in the AAA genome group4 .

The letter c was eventually changed to k to differentiate it from 'Lacatan', the American name for the tall Cavendish cultivar known as 'Bungulan' in the Philippines1 .

Illustration of 'Lakatan', then spelled with a 'c', in Flora de Filipinas. (Source Wikimedia Commons)

The height of the pseudostem (from the base of the pseudostem to the emerging point of the peduncle) is 2.7-2.8m. The male bud is pendulous, ovoid with obtuse tip. The colour of its bracts is purple-bron on the outside and orange-red on the inside, fading towards the base. The bract rolls up before falling (revolute).1